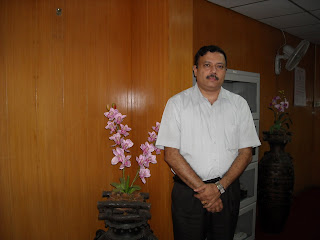 T.K. Jose, the managing director of the Roads and Bridges Development Corporation of Kerala, says that many rail overbridges and highways are on the anvil

It is not easy to build a rail overbridge (ROB) in Kerala. There are so many agencies that are involved. For the ROB planned at the Atlantis crossing in Kochi, firstly, the opinions of the local people, the elected officials, and the traders had to be sought.

Then the representatives of the Roads and Bridges Development Corporation of Kerala (RBDCK), the Indian Railways, the Cochin Corporation and politicians had to do a joint inspection.

“We have selected a location which is at some distance from the present one,” says T.K. Jose, managing director of the RBDCK. Now a drawing of the project has to be done. “This has to be approved by the Railways,” he says.

Once that is done, the Corporation will ask the state government to start the land acquisition process. Then the inertia-laden wheels of the bureaucracy will have to be set in motion.

Earlier, most of the projects of the RBDCK were delayed because of the problems regarding land acquisition. Land owners frequently went to court because of antagonism to the project or for the low prices that were offered. Now, a new fast-track mechanism has been initiated. A purchase committee headed by the District Collector has been set up.

“The owners are taken into confidence,” says Jose. “There are transparent negotiations and a price, which is close to the market rate, is fixed up.”

Out of 48 ROBs, entrusted to RBDCK, 18 have been completed, the latest being the one at Pullepaddy in Kochi, while another three -- at Koratty, Athani and Bakel -- are nearing completion. The remaining ROBs are in various stages of progress. Incidentally, the ROB at Edapally is handled by the National Highway Authority of India.

At his office in Palarivattom, Jose clicks on his mouse and shows the company website. “There is a weekly monitoring of the work, and the findings are published on our site,” says Jose. “This enables the public to ascertain the progress of the project.” If there is a delay in the week’s target, the contractor is asked to give an explanation. “We don’t want to get stuck,” says Jose.

However, the RBDCK was stuck in 2009, with unpayable loans and incomplete projects. But a timely offer of Rs 234 crores by the state government enabled the corporation to clear its dues, especially to the Housing and Urban Development Corporation Limited. Today, there is a share capital of Rs 50 crore. “We are all set to complete our projects on time,” says Jose.

Apart from bridges, the RBDCK is also involved in highway projects. “Because of heavy traffic, we will be converting the Airport-Seaport Road, from Irumpanam to Kalamaserry, from two to four lanes,” says Jose. A 14.9 km long road will be built from HMT Junction to Kariyadu.

“We are planning a West Coast Highway, from Ponnani to Elathur, which will reduce the distance from Kochi to Kozhikode by 40 kms,” he says. Other projects include the Thankalam (near Kothamangalam)-Kakkanadu, and the Cherthala-Kottayam highways.

Of course, for the public, the major ire is the poor condition of the roads all over the state. “The majority of the roads are handled by the municipal corporations and the Public Works Department (PWD),” clarifies Jose. “In Kochi, our only responsibility is the Airport-Seaport Road, which is in good condition.”

RBDCK engineer Abdul Salam explains that you need five layers to build a good and durable road. “There has to be a sub base of good quality earth,” he says. The second layer should have a granular sub-base of earth and small stones. Over it there should be a wet mix macadam. On top of that, thick bituminous macadam, as well as bituminous concrete has to be applied.

“We need to build strong roads, because the number of vehicles has increased manifold,” he says. “Also, container vehicles weigh as much as 40 tons. It puts a lot of pressure on the roads.”

Unfortunately, the PWD uses only 150mm of water-borne macadam and a 20mm of chipping carpet layer. “As a result, the roads break up easily,” says Salam.

Meanwhile, in order to create a better class of infrastructure, Jose is keen that the academic and research community develop a tie-up with government agencies.

“In the West, the design for good roads and bridges are supplied by the universities and engineering colleges,” he says. “A similar partnership should be established in Kerala.”

Recently, there was a welcome initiative. The SCMS College of Engineering at Kochi studied the traffic congestion of the city and gave a report to the government. “Hopefully, we will get more such inputs,” says Jose.

Input or no input, Jose is determined that the RBCDK finishes its pending projects on time. “I feel very proud of playing a role in improving the infrastructure in Kerala,” he says.