'Lord Buddha is a great soul' 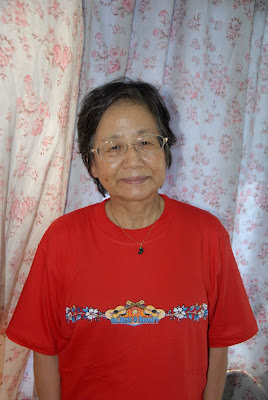 Tourist Michiko Yamagishi, 74, who came to Kochi recently, lives in Ashiya, near Osaka in Japan. One of the first things she does when she gets up at her home is to go to the altar in the living room. There, she kneels in front of an idol of Lord Buddha.

“I ask God to make the day safe for me,” she says. “I also pray that my son and daughter and their families do well in life and enjoy good health.” She also prays for her husband's soul. A retired engineer, he died in May this year.

Apart from that, as an ardent Buddhist, she chants the scriptures and offer flowers, water, and food to the idol. The Japanese regard the family altar as a miniature temple.

Thereafter, Michiko does not do any formal prayers, except late at night, just before going to sleep. “I thank Lord Buddha for the safe day and express my gratitude for all the good things that have happened,” she says. “I also appeal for world peace.”

Michiko believes that God lives inside her. “There is no need for formal prayers,” she says. “You can pray to God at any time. He is always listening.”

Once a year she goes to her favourite temple: the Chionin Jodoshu temple in Kyotu, 50 kms from her home. “I attend a memorial service for souls who have passed away,” says Michiko. “I like the temple because it is very peaceful and silent. Even though it is quite crowded, there is an abundance of positive energy.” Several types of services are held there: sunrise, family, memorial, wedding, and funeral services.

The temple has some unusual aspects. Built in 1234, an umbrella was found placed in the rafters outside the main temple. One of the architects had deliberately placed it there to help bring rain (and ward off fire).

Secondly, the wooden boards were made in such a way that it would rub against the metal joints. So when anybody stepped on them, it created a loud noise. This was intentionally done so that intruders could be nabbed.

Michiko belongs to the Jodoshu branch of Buddhism. Founded by religious reformer Honen Shonin in 1175, he did not discriminate against anybody and simplified complicated rituals. This was a revolutionary act, because in the 11th century, Buddhism was reserved for the social and political elite.

When Michiko closes her eyes to pray, she sees a clear image of Lord Buddha. “He is sitting cross-legged,” she says. “He has slanting eyes and is looking downwards.” Asked whether she is sure God exists, Michiko says, “He might or might not exist, but to me Lord Buddha is a great soul.”

So, does she get angry with God when bad things happen? “Never,” she says, emphatically. “It has nothing to do with God, and everything to do with our actions. Look inwards and purify yourself. Then negative events will not happen.”