‘The supreme power: you can call it Jesus, Allah or Ganapathy’ 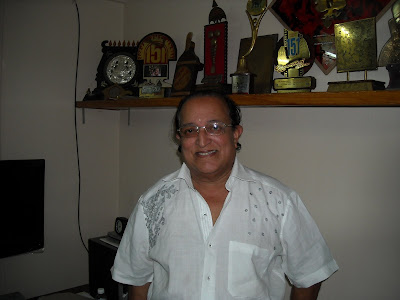 The actor, T.P. Madhavan, has no doubts about the existence of God, and prays to Him all the time

Actor T.P. Madhavan gets up at 4.30 a.m., has a bath and immediately sets out to the Ernakulathappan temple at Kochi. He participates in the Nirmalaya puja to Lord Shiva.

Standing before the deity, Madhavan says, “I submit to you, Lord Shiva, at every second of my life. Let the day pass safely. Let there be no hurdles. Let everything work out fine.” Thereafter, he says several shlokas in praise of Shiva and Ganapathy.

“Lord Ganapathy is also called Vigneshwara, the God who can remove obstacles,” says Madhavan. “I always pray to Him. He is a powerful God.”

After walking three times around the temple, Madhavan returns home. In his prayer room, he closes his eyes and again chants mantras in praise of goddesses like Laksmi and Saraswati, as well as Murugan, the god of finance.

“I don’t believe in godmen, but there are certain God-realised human beings whom I respect and pray to,” he says. They include the saint Ramana Maharshi, and spiritual leaders like Swami Chinmayananda, and Sree Narayana Guru.

“Narayana Guru’s great philosophy of ‘one caste, one religion, one God for man’ should be adopted by all,” says Madhavan. “God created us as human beings, but it is man who has made divisions like Christians, Muslims and Hindus.”

Like Narayana Guru, the actor is a staunch believer in God. Whenever he does any long-distance driving, throughout the journey, he will murmur the Sahashranama mantra, ‘Om Namah Shiva’. “I reach my destination safely only because of God,” he says. “In a way, I pray to God throughout the day in my innermost mind.”

Madhavan says that he has no doubts about the existence of God. “There is a supreme power in the universe,” he says. “You can call it Jesus Christ, Allah or Ganapathy. It is all the same.”

The actor says that all the major happenings in his life took place, thanks to the intervention of God. In the 1970s, he was working in a film distribution company in Kolkata, and acting in plays organised by the cultural organisation Kala Parishad.

The Malayalam film star Madhu came to Kolkata to look for an actress to play a role in his directorial debut, ‘Priya’. Madhavan had a chance meeting with the star at a friend’s place. “I introduced Madhu to Bengali stalwarts like Uttam Kumar, Soumitra Chatterjee and Madhabi Mukherjee,” he says. Eventually Madhu selected the actress Lily Chakraborty.

Later, Madhavan moved to Bangalore, following his marriage. In 1975, for the first time, the Karnataka government announced that it would provide a subsidy to make films. It was Rs 2 lakh for Kannada films and Rs 1 lakh for other south Indian languages.

One day, there was a note pasted on Madhavan’s door. ‘Please meet me—Madhu.’ And the name of the hotel was given. The actor had come to Bangalore to secure the government subsidy so that he could make a film. Madhavan helped Madhu to get the money. A grateful Madhu gave the younger man the role of a manager of a company in his film, ‘Kamam Krodham Moham.’ Thereafter, there was no looking back.

“My meeting with Madhu was a divine help,” says Madhavan.

Asked whether he gets angry with God when bad things happen, Madhavan laughs and says, “Yes, I get upset and tell God to go to hell. I say, ‘I have been praying to You for so many years and now You are doing this to me?!’ But at the end of the day, I tell Him I am sorry. I realise it is for my good. God always knows what is best for my life.”