Words to soothe a wounded soul 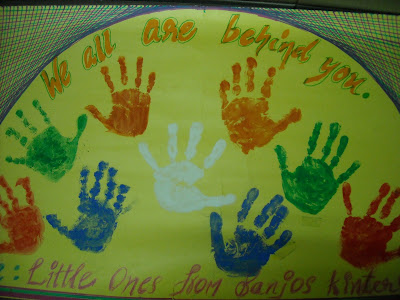 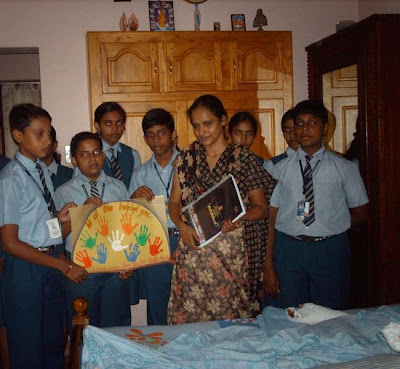 The students of Sanjo CMI Public School at Koduvely made a 300-page book, with their letters of consolation, and presented it to Newman College Professor T.J. Joseph. It was a gesture of love and solidarity

Photos: The poster made by the kindergarten students.

The students with the poster at Prof. Joseph's house in Muvattupuzha. Joseph's wife, Salomi, is holding the book

On July 4, when Muslims fundamentalists chopped off the hand of Prof. T.J. Joseph of Newman College, Thodupuzha, for naming a lunatic Muhammad in a Malayalam question paper, Fr. Johnson Palappally, the principal of the Sanjo CMI Public School, at Koduvely, near Thodupuzha, held a meeting with the students and the teachers.

“We decided we should protest in some way against this brutal act,” he says. “Of course, the usual method is to hold a rally, or a public meeting. I asked my students to think in a different way.”

One of the students suggested that they could write something. “I liked the idea,” says Johnson. The next day, during the morning Assembly he asked all the students to write a letter. “I told them that it is a very sensitive issue, and they should write very carefully,” he says. Within three days there were 315 contributions. “To my surprise, most of the students showed a great deal of maturity,” he says.

Wrote Milan Shavin of Class 3: “The attack is against our culture and civilisation. A belief in God and all religions is very essential. It makes one a good human being.”

Says Robin Sajee of Class 8: “I am very sad to know that you are a victim of terrorism in Kerala. I offer my prayers and wish you a speedy recovery. May the merciful God bless you and your family.”

All the writings were collected together and made into a book. On the cover is a photo of Joseph, with the word, 'Kayyoppu' (Signature) under it. “There is an underlying meaning to this word,” says Johnson. “We wanted to tell Prof. Joseph that we are providing him with the hand he had lost.”

In the book, the entries are written, with a mix of pen and pencil, in diverse writing styles. They were mostly in Malayalam, with a few English letters. On the top of every page there is a small photo of the professor with the words: 'With love and compassion to Prof. Joseph from Sanjo CMI Public School'.

The kindergarten children placed painted palms on a poster, with the words, “We all are behind you.”

Finally, one day, a group of 15 students, of Classes 7 to 10, led by Johnson went to Joseph's house in Muvattupuzha. The children read out a few letters and then presented him with the poster.

One of the students, Anita Mathew, told Joseph, “We feel sorry for what has happened. In future we will try our best to prevent such brutal acts.” Says Jibin T. Jenson, 14, the general secretary of the school: “The state government should take stern action, so that such incidents do not happen again.”

Sr. Stella, Joseph's sister, says that the children were shocked when they saw the injuries. “Some of them looked away, while a few had tears in their eyes,” she says. “I was also touched by the concern of the children and the dynamism shown by Fr. Johnson.”

Joseph, as expected, was deeply moved. “Thank you for your compassion,” he told the students.

After the schoolchildren left, Joseph began weeping. For a few days after that, whenever he could not sleep at night, Stella would read out the letters. “It was the best medicine for my brother,” she says. “He would have a peaceful sleep after that.”

Joseph has told Stella that the poster should be mounted on the wall and the book kept safely. “He speaks often about this precious gift,” she says.

Meanwhile, for Johnson, the most wonderful memory was to see the look of happiness in Joseph's eyes. “I cannot find the words to describe it,” he says. “The children were very happy. They felt that they had done a great deed.”

And indeed they had! After all, no other school did what they did.