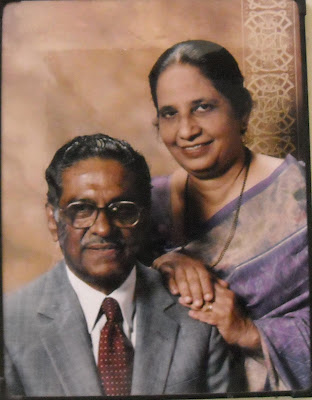 Dr. Thomas Sebastian's life was shattered on March 5, 1992, when his wife Thresiamma died of breast cancer. He had four teenage daughters. Thereafter, for the next three years, the anaesthetist, based at Kochi, managed the household on his own. “The thought of remarriage never entered my mind,” he says. But in 1995, he received a proposal.

Mariamma Ambooken, 47, was a widow. Would Thomas be interested in marrying her? He pondered over it and broached the matter to his five brothers. “They all felt I should remarry because I would need the help of a wife to look after the children,” says Thomas. He then announced his decision to his daughters.

“I told them that they would all get married and move away,” he says. “I would be alone after that.” The children accepted his line of reasoning.

Mariamma became a widow in 1989 after 22 years of marriage. She was not keen to get married again, even though she had no children, but her mother told her it would be very lonely if she remained a widow.

“This turned out to be true,” says Mariamma. “Whenever I went for public functions I would end up standing at one corner, all alone. I felt that society did not accept me.”

So Thomas and Mariamma got married on January 2, 1995. “Initially, there were a few adjustments problems, but there was nothing major,” says Thomas, 75. But for Mariamma, 62, it was a bit more difficult. She is 13 years younger to Thomas. “Thomas was fixed in his ways and so was I,” she says. “But after a period time, we developed an understanding.”

Mariamma also had to learn to become a mother. “It took some time, but I was gradually able to learn to deal with the girls in a responsible manner,” she says, with a smile.