The sun goes down 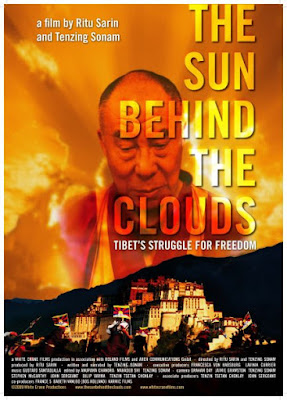 An award-winning documentary, 'The Sun Behind the Clouds', highlights the dilemma in the Tibetan community. While the young want to fight for independence from China, the Dalai Lama wants only some degree of autonomy

In February, director Ritu Sarin calls Sethu Das, the founder of ‘Friends of Tibet’, and says, “There is good as well as bad news.”

“We won the Silver Conch Award at the 11thMumbai International Film Festival,” says Ritu. Then, with tongue-in-cheek, she adds, “The bad news is that there was no Chinese around to create a controversy.”

During the Palm Springs Film Festival, at California, in January, China protested the screening of the documentary, ‘The Sun Behind The Clouds: Tibet’s Struggle for Freedom,’ directed by Sarin and Tenzing Sonam. When the festival organisers refused to withdraw the film, China pulled out two of its films in anger.

‘The Sun’ eventually won the ‘Best Of The Fest’ award at Palm Springs, apart from the Vaclav Havel Award, for contributing to human rights, at the One World Film Festival at Prague in March. It also won the Best Long Documentary award at the 3rd Kerala International Documentary and Short Film Festival at Thiruvananthapuram in June.

The film, 79 minutes long, is a riveting look at the life of the Dalai Lama as he spends his time in meditation at his headquarters at Dharamsala and follows him on his travels all over the world, including stops at Seattle, for an interaction with Chinese journalists, to London, where he has an enjoyable meeting with Prince Charles, to Berlin, where he meets German legislators at the Parliament, and Paris.

In the French capital, the Dalai Lama meets with the members of the expatriate Tibetan community and elucidates on his Middle Way approach. “We are not seeking independence,” he says. “We are very much happy to remain within the People’s Republic of China. We only want to preserve our culture and religion.”

But, increasingly, young Tibetans feel that this approach has yielded little benefits. “There is a division among Tibetans between total devotion to His Holiness as our religious and political leader, and at the same time wanting independence,” says Lhadon Tethong, Director of Students for a Free Tibet.

Says a young Tibetan: “Since China has ignored the Middle Way, the time has come for the Dalai Lama to change his policy.”

Writer Jamyang Norbu says that the Dalai Lama is on the horns of a dilemma. “It is difficult to be a political and spiritual leader at the same time,” he says. “But it is time that His Holiness led the protests of the youth.”

But even as the people are talking, the scene shifts to Lhasa, where young monks holding aloft Tibetan flags are staging the biggest-ever protest, since 1949, when the country was annexed by the Chinese. This was in March 2008, before the Olympic Games at Beijing.

“We want freedom! We want independence!” shouts a monk, as groups of men burn cars and try to pull down shop shutters, followed inevitably by Chinese policemen wielding the baton with great force. Soon, tanks are rumbling on the streets. Many Tibetans are killed, even as the uprising is quelled.

Later, at a public meeting at Dharamsala, a woman leader, Dolma Gyari, says, “You cannot kill everyone with your guns! More will rise up behind them.”

As the protests continue in Tibet, young India-based Tibetans, led by activist and writer, Tenzin Tsundue, begins a march from Dharamsala to Tibet. (Tsundue gained international fame when he unfurled a long, ‘Free Tibet” banner alongside the Indian Institute of Science building, at Bangalore, during Chinese Premier Wen Jiabao’s visit in 2005).

Says Tsundue: “This march will link the struggle in exile with the struggle which is happening inside Tibet.” The group walked for four months through the Himalayas, but at Dharchula, which is 60 kms from the Indo-Tibetan border, the Indian police forcibly closed down the march.

Meanwhile, at a rally in New York, a young Tibetan rap singer, Namgyal Yeshi, sings, “If you are Tibetan, it’s time to regain independence.” The camera cuts to Chinese Foreign Ministry spokesman, Qin Yang, who says vehemently, “The Dalai Lama should give up his position on independence.”

In the end the film leaves one with a poignant feeling for a people, 6 million strong, who have lost their country and are gradually losing their culture, especially in Tibet, where Han Chinese have moved en masse into the country. They now number 7.5 million. The Tibetans, tragically, are becoming a minority in their homeland. The future, in the face of China's political and economic might, looks bleak.