Lots of space and light 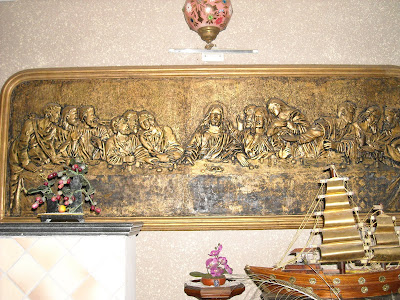 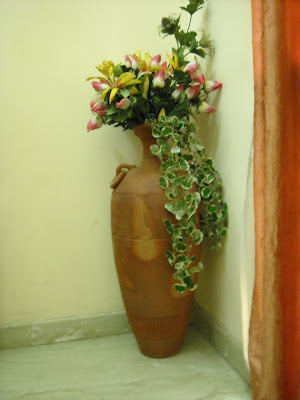 Photos: The reproduction of 'The Last Supper'; a mud vase

“There is a lot of construction going on in the neighbourhood,” says Sherly Wilson. “So there is plenty of dust. I have to keep the windows closed.” These are French windows, 14 feet high. “I just wanted to be different, so I got these windows made,” she says. The bungalow, in Venalla, a suburb of Kochi, is spread over an area of 3,800 sq. ft.

Inside, the living room also has a ceiling of 16 feet. “I wanted good air circulation,” says Sherly, whose husband works in the oil industry in Saudi Arabia. “And we wanted a lot of light.”

So a skylight has been made. Architect Saira Mathew says, “The varying quality of light, like at dawn or in the evening, creates different moods inside the house. Also, the aim is to create a smooth circulation of air. In the humid climate, the hot air rises up and goes out through the skylight."

Just next to the living room is a 'Nadumuttam', a replication of the inner courtyard, which is there in every traditional home in Kerala. On a wall, at the opposite end of the living room, there is a striking reproduction of Leonardo Da Vinci’s masterpiece, ‘The Last Supper’.

An artist, John Zacharia, first recreated the images of Jesus Christ and the 12 disciples at home on plaster of paris and then came and pasted it on the wall. It has a golden sheen to it.

Right through the home, there are curios, sometimes embedded in walls, or placed in bookshelves, or on pedestals. Two striking objects are a Royal Enflield motorbike, made of wood, and a wrought-iron bicycle. “I got both of them from a market in Manali,” says Sherly. A wooden model of an old British ship, with billowing sails, was bought in Singapore, when the family had gone there for a holiday.

In a guest bedroom, on one wall there is a painting by John of bamboo plants with the leaves sticking out, and a cuckoo's nest. “When people look at it, they will get a soothing feeling,” says Sherly. It helps that the walls have been painted in a lemony colour. Another bedroom, for visiting in-laws, has a brick-red colour. “As you age, your eyesight weaken, so I felt bright colours would enliven their environment,” says Sherly.

On the first floor, apart from a foyer, there is another living area, with low-slung sofas and a television set. A door to one side leads to the children's bedroom. One bed is shaped in the form of a car, while the ceiling has been painted in blue, while glittering stars has been pasted on it. “At night, when the lights are switched off, my four boys will feel as if they are staring at heaven,” says Sherly.

Indeed, for Sherly and her family, this house is indeed a heaven on earth.