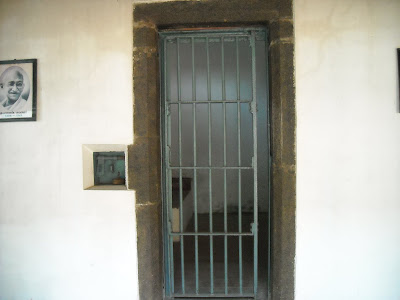 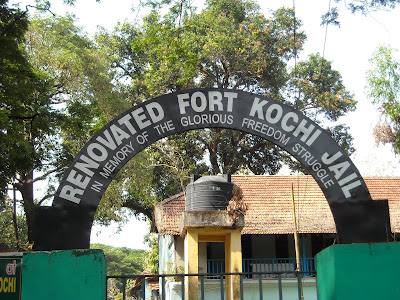 A 146-year-old prison in Fort Kochi, which had been renovated, has become a magnet for tourists, especially foreigners

Photos: The entrance to the cell; The signboard outside the jail

A few months after M. Beena took over as collector of Kochi, in 2008, she happened to visit the Revenue Divisional Office at Fort Kochi. This used to be a former jail complex. When she looked out from one of the windows, she saw several cells in a rundown condition, and the roof broken in many sections.

Since she was the secretary of the Cochin Heritage Zone Conservation Society (CHZCS), she asked the officers about the possibility of renovating it. They did a study and realised that they needed Rs 10 lakh. They approached various corporate entities and finally the Bharat Petroleum Corporation Limited (BPCL) gave the money.

“It is part of our corporate society responsibility,” says George Thomas, senior manager, public relations, BPCL. “We are keen to protect historical buildings.”

There are eight cells placed side by side. Designated for condemned prisoners, each cell has a length of 12 feet, a width of 9 feet, and a neck-craning height of 21 feet. Inside, it is cool and silent. There is a cement bed at one corner. At the other side is a small hole in the ground. It has the circumference of a coin. “This is the urinal,” says K.S. Srijith, liaison officer of the CHZCS. “Undoubtedly, there would have been a constant smell of urine in the cell.”

Interestingly, the lock is set in an alcove just beside the cast-iron door. From inside the cell, if you put your hand through the grille, you will not be able to reach the lock. “It is very cleverly located,” says K.E. Gafoor, CHZCS supervisor.

Beside each door a photo has been mounted on the wall. There are eight in total: Mahatma Gandhi, Jawaharlal Nehru, B.R. Ambedkar, Netaji Subhash Chandra Bose, and the Malayali contingent of political leaders: A.K. Gopalan, Akkamma Cherian, and EMS Namboodiripad.

“They were all freedom fighters,” says present District Collector P.I. Sheik Pareeth. “All of them had spent time in jail during their careers.” Thus, the photos seemed appropriate in this setting.

Opposite the cells is a huge mango tree. “This is more than 200 years old,” says Pareeth. “The prisoners could have been hanged from the branches.”

As to the year when the jail was established, T. Rajeshwari, a special officer, (CHZCS), says that she has come across old roof tiles. “On it was engraved, 'Commonwealth Trust Ltd, Calicut, 1865’,” she says. So, the jail is 146 years old.

Outside, there is a board which says ‘Renovated Fort Kochi jail’. This has pricked the curiosity of many people. “We get visitors from all over the world,” says Pareeth. In the visitor's book, there are entries by tourists from France, Germany, Netherlands, Poland, Spain, Denmark, Greece, Norway, Scotland, Brazil, South Korea, New Zealand, Israel, and Australia.

“One Australian visitor said that he was amazed at the space given to one prisoner,” says Pareeth. “He said that cells in his country are cramped.” Locals also visit the jail, along with tourists from Bangalore, Chennai and Hyderabad.

Each cell contains the memories of so much grief and agony of men condemned to die. If only walls could talk…