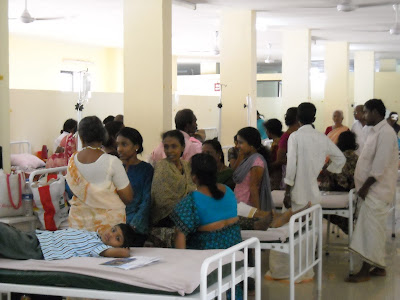 When a patient dies, a doctor has the unenviable task of informing close relatives about it. Doctors recount how they go about this delicate task

Photo: Relatives milling around a patient in the General Hospital, Kochi

A few years ago, a baby was brought to the neonatology department of the PVS Memorial Hospital at Kochi. The child was having convulsions and shortness of breath. The parents were anxious. This was their third child. The first two babies had died at childbirth.

“We did all sorts of investigations, but could not find anything wrong,” says Dr. Tonny Mampilli, senior consultant, paediatrics and neonatology. Then Mampilly decided to do a metabolic test. For that, the blood had to be taken to Bangalore. Four days later, the results came: the baby had a genetic disorder which prevented the body from manufacturing certain enzymes. This happens when there is a marriage between close relatives. The parents, who are Muslims, are second cousins.

“I told the parents we would be able to keep the child alive for some time, but the situation was hopeless,” says Mampilly.

Eventually, the disappointed parents allowed the ventilator to be switched off. “It was a painful incident,” says Mampilly, who has 30 years of experience, working in Saudi Arabia, the United Kingdom, and Kerala. “Even now, it is distressing to announce the bad news to the parents. Fortunately, neonatal deaths have become much less.”

The key to avoid angering parents is transparent communication. “By talking sincerely, I try to gain the parents' trust and confidence,” says Mampilly. “When the situation stabilises, I will inform the parents about the good news. But if, after a few hours, things take a sudden turn for the worse, I will give the disturbing information immediately.”

Dr. M.K.C. Nair, a paediatrician, who presented a paper – 'How to break the bad news' – at a neonatology seminar at Kochi, recently, gives some tips. “Explain everything in a simple manner to parents,” he says. “Encourage questions from them and be sympathetic. Research has shown that family members, who had been informed about likely events, found it easier to cope with a loss.”

Of course, when the death takes place, there is an emotional reaction, like loud crying. “Usually, the woman loses control, but that is understandable,” says Mampilly. People have to grieve in order to get over the death. But this type of reaction usually happens when the death is unexpected.

Of course, there are times when there is an over-reaction. V. Madhu, the Resident Medical Officer of the Ernakulam General Hospital, remembers an incident. A 24-year-old girl threw herself in front of a train at Ernakulam Town railway station. “She had a head injury,” he says. “There were severe cuts on the hands and legs.”

As the girl was being taken into the casualty department, she breathed her last. At that moment, one hand which was hanging by a sliver of skin slipped from the gurney. A nursing assistant put it back on the stretcher.

The police constable, who accompanied this girl, took this hand movement as a sign of life. “He said that it indicated that the girl was alive and the doctors had done little to save her,” says Madhu.

The incensed constable caused a commotion. “The bystanders felt that if a policeman was creating this ruckus, then he must be right,” he says. But when Madhu checked the electrocardiography, it remained as a flat line on the monitor. Later, when other policemen arrived, Madhu told them, “Your job is to protect us. Instead, you are attacking us.”

In the general hospital, there are about 50 deaths every month. So doctors are regularly informing close relatives about deaths. “Protests and violence can occur when there is a poor interaction between the doctor and the relatives,” he says. “It is vital for a doctor to be an effective communicator.”