The harassment of husbands 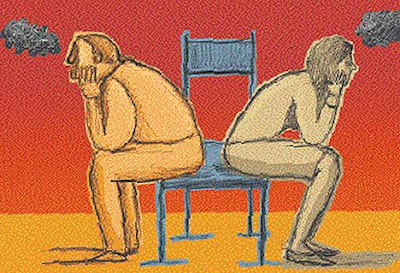 If a wife files a complaint under Section 498A of the Indian Penal Code, husbands can be arrested and jailed. Men say it is an unfair and biased law

One morning when Anil Menon got up, he saw his wife, Meera in the kitchen. “She was facing the wall and whispering into the phone,” he says. “I felt there was something wrong about it.” Anil asked for the phone. Meera hurriedly cut the call. Within moments, the ping sound of a SMS message came through. Anil grabbed the phone, and looked at the message. It said, 'Okay, thanks.' Anil checked the 'Sent' messages folder and was able to locate Meera's message, which said, 'Good morning. Have a nice and fruitful day.'

“When I saw this message everything fell into place,” he says.

Anil called his and Meera's parents and told them about what was happening. Meera said the man, Ramesh, was just a friend. “It took her three hours to say that he lived in the same building,” says Anil. Ramesh was a divorcee.

Anil and Meera had fallen in love while they were studying in Maharaja’s College in Kochi. After a courtship of seven years they got married. Initially, things went well and the couple had a son in 2003.

But in 2005, Anil had gone to London to look for a job. “I was away from the family for two years,” he says. It was during this time that Meera fell in love with Ramesh. “She was a weak character,” says Anil. “When I was in London, I had many opportunities, but I never betrayed my wife.”

When Anil returned in January, 2007, Meera asked for a divorce. Anil refused and said they could work things out. In December 2007, Meera filed a case of harassment under Section 498A of the Indian Penal Code against Anil and his parents.

The law goes like this: 'Whoever, being the husband or the relative of a woman, subjects such woman to cruelty shall be punished with imprisonment for a term which may extend to three years and shall be liable to a fine. The offence is cognizable, non-compoundable and non-bailable.'

“She realised that if she slapped this section on me, I would become vulnerable,” says Anil. Meera also stated that Anil had taken dowry and wanted the Rs 10 lakhs back. “That was laughable,” he says. “We had a love marriage and I did not take any money.” Finally, seeing his parents and son become emotionally upset, Anil compromised and had an out-of-court settlement for Rs 5.5 lakh.

“I had to sell some property to get the money,” he says. In December, 2008, they were divorced. But what burned Anil up was that Meera married Ramesh within six months. “It showed that she was lying all along,” he says. “Now she is pregnant.”

Looking back, more than two years after the events took place, Anil says, “Section 498 A is a tool that has been misused by women. It filled me with fear because I could be arrested and sent to jail. The law assumes that the man is guilty on the basis of a statement of a wife.”

Meanwhile, the Thiruvananthapuram-based Soman also had a bad time. Frequent verbal spats with his wife, Revathi, caused her to file for divorce. She filed a case under Section 498 A, citing cruelty by her husband and lodged a FIR.

One morning, at 6 a.m., the police came and arrested Soman. “In the area where I live, my reputation was destroyed,” he says. Soman spent a day in the lock-up before the bail application came through.

Soman, who works as a chartered accountant in a reputed firm, had bought an apartment in which his wife and he were the co-owners. “But the parents of Revathi insisted that the apartment should be given over to her. Eventually, to buy peace, I did so.” The couple has a seven-year-old daughter.

“Section 498A is blatantly unfair and against the man,” he says.

When asked for advice they could give to others, in the same predicament, Soman said it would be better to file a police complaint before the wife does, to negate the impact of Section 498A.

Anil, smiling for the first time, says, “It is better to take dowry. In case, the marriage does not work out, you can return the money which is hers, rather than give some of yours. Finally, always treat your wife as a stranger, when it comes to money.”

(To protect identities, names have been changed)