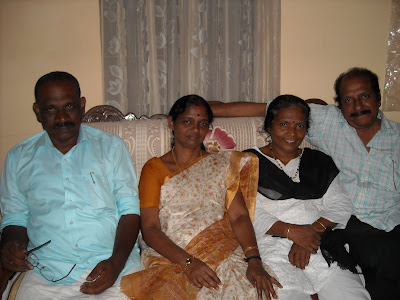 COLUMN: VOICE OF THE PEOPLE

At 8 p.m., on a Friday, Rita Balachandran returns to her Laurie-Baker style house in Edapally after attending post-graduate classes in a nearby college. “I am keen to do further studies,” says Rita, who retired from Canara Bank recently.

But what worries her today is the way campus politics has ruined the academic year. “We have had so few classes,” she says. “After a lull, politics has returned in full force in colleges during the current rule of the LDF (Left Democratic Front).”

She says that youngsters are lured into becoming members of the Students Federation of India (SFI) and the Kerala Students Union (KSU). “Many students have ruined their future by doing this,” she says.

Rita recounts the case of Jay Mohan (name changed), a KSU activist, who was beaten so badly by SFI activists that he is paralysed. “It brings tears to my eyes,” she says. “Jay Mohan belongs to a poor family in Idukki. His mother has to feed and look after him.”

Rita's husband, R. Balachandran, a retired bank officer, says that despite this, there have been quite a few achievements by the government. “The private bus monopoly in Kochi has been broken,” he says. “The bus workers would conduct flash strikes, and behave rudely with passengers.” Now, there are numerous Jawaharlal Nehru Urban Renewal Mission buses, apart from the Thiru Kochi buses.

During the past five years, the police have been able to solve many crimes quickly and efficiently. “Of course there have been blemishes like Sampath, a murder accused, who allegedly died in custody,” says Balachandran.

Rita nods, and says, “I don't have anything good to say about this government, except for one fact: the government allotted 50 per cent of the seats during the recent local body elections to women. This was a very good development. It has given a lot of confidence to women. Even in the home, women are now enjoying a heightened respect, especially from the mother-in-law.”

M.N. Ramakrishnan, a friend of the Balachandrans for more than 30 years, is a retired government servant. Because he married late, he has school-going children: a boy and a girl. “I worry for their future,” he says. “To enable your child to become a doctor or an engineer is beyond the scope of the middle class. You need lakhs of rupees to secure admission. And this is a government that is supposed to care for the common man.” Says his wife P.J. Sujatha: “The price of vegetables has gone up so much.”

So what do they want from the next government? “An end to vote bank politics,” says Ramakrishnan. “The Hindus, Muslims, Christians, Nairs, and Ezhavas are able to bully the government, and get what they want. But the tribals? There is nobody to talk for them.” Sujatha is afraid of the numerous attacks against girls and women. “There should be heightened security,” she says. Balachandran wants an end to the violence between party workers. And Rita has one plea: please bring down the price of vegetables.