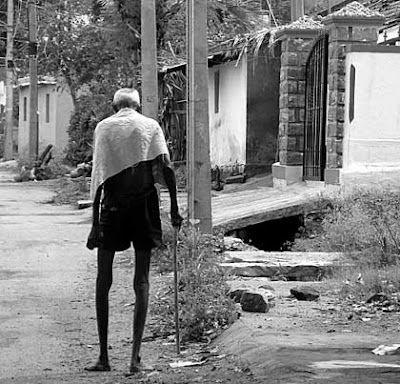 As society changes rapidly, the elderly tend to be neglected by children and relatives

“Ageing should be graceful,” says Philip Jackson Biveira, the former managing director of the Kerala State Handicapped Persons' Welfare Corporation. “It should not be 'ill'derly, but 'well'derly'. It is important for the elderly to develop a positive attitude and a loving heart.”

But even that may not be enough. More and more elderly people are being neglected by their children, and left to fend on their own. “Fifteen years ago, we could not imagine that such a situation would arise in Kerala,” says Fr. Mathew Kallinkal, the Director of the Ernakulam Social Service Society. “But can we blame the children? Nowadays, they live in a nuclear family, with both son and daughter-in-law working. It is very difficult for them to look after their parents.”

Both Biveira and Fr. Mathew were talking at the symposium on the 'The Problems Of The Aged and Geriatric Care in Kerala Society' at Kochi recently. This was organised by the House of Providence, which runs an old age home, in association with Helpage India.

But Advocate Sherry J. Thomas says there is a legal protection for neglected old people. He cited the Maintenance and Welfare of Parents and Senior Citizens Act, 2007. “Not many people are aware of this act,” he says. “The state government should do more to propagate it through the media.”

The act began to be implemented in Kerala only in 2009. “Any person above 60 is entitled to food, clothing, shelter and medicines,” he says. “This should be provided by the children or close relatives.” Since parents are reluctant to file complaints against the children, NGOs and other groups should help the elderly in this regard. According to the Act, the Revenue Divisional Officer has to provide a solution within 90 days of filing the complaint.

One important provision is that in case of harassment or neglect, the parents can regain ownership of the property which has been bequeathed to the children. “This is a big protection for the parents,” says Sherry.

District Social Welfare Officer M.S. Vasanthakumari defended the role played by the government. “There have been many provisions granted to elderly people,” she says. “They get significant discounts on railway tickets. Special seats have been provided for them on buses. Each resident in an old age home should get 40 sq. ft of space. There should be one bathroom for 10 people.” The Social Welfare department is running 72 old age homes in Ernakulam district. “Nevertheless, the elderly are facing a grim situation,” says Vasanthakumari. “Many suffer from mental and physical problems.”

Some of the physical problems include hypertension, asthma, heart diseases, and diabetes. “If an elderly falls sick, he should be given treatment at once,” says Sr. Suma Kuttickal, principal, Lourdes College of Nursing.

“They should drink at least eight glasses of water every day. They should be well covered so that they do not catch pneumonia.” Other health suggestions include putting white onions in a glass of water overnight and drinking the liquid the next morning. “This enables one to control cholesterol,” she says. “Take calcium regularly to avoid osteoporosis. Use soft toothbrushes to brush the teeth. Regular exercise and yoga are good for the health.”

However, the speed at which society is changing, with values disintegrating at an even faster rate, the future for elderly people is indeed bleak.