Stepping out from behind the walls 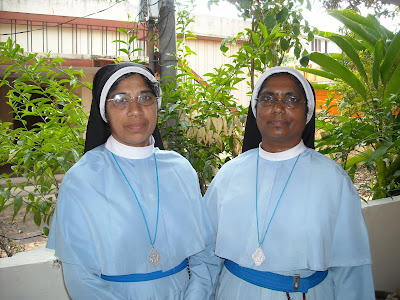 With the Mother Provincial's permission, Sisters Ancy and Mercy have stepped out of the convent and are living in a house in Kochi among ordinary people. This is the first time this has happened among the Sisters of the Adoration of the Blessed Sacrament

More than 500 nuns belonging to the Ernakulam province of the Sisters of the Adoration of the Blessed Sacrament were given an option: would they like to step out of the convent, and stay among the people, and help the poor? Only two responded.

They are Sisters Ancy Mappilaparambil and Mercy Vadakumchery. They live in a rented apartment at Elamakkara. “For the first time we have to learn to live on our own,” says Ancy.

At their home, the nuns lead an austere existence. They don't have a refrigerator, a television or a washing machine. “We try to lead as simple a life as possible,” says Mercy. Meals are usually kanji (rice gruel), curd, and pickle.

And they have started a programme, ‘Sannidhyam’, where a hundred children of parents who have been afflicted with Aids are given Rs 300 a month to pay for their education. The nuns have started joint accounts with the children to ensure that the money is not diverted for other purposes. And the duo have adopted a motto: ‘Being present among the marginalised’.

So far, they have got sponsors for the children. “The benefactors come from varying backgrounds,” says Mercy. “Some are business people, a few are professionals, while the others are entrepreneurs. People are willing to donate money if they know that you are genuinely helping troubled people.”

The troubled people include sex workers and Aids-stricken parents. First the man gets the disease though unprotected sexual contact with a woman, and passes it to his wife. As soon as the relatives come to know, the parents are ostracised. They are not allowed to eat the same food or use the family bathroom.

“The parents become depressed and lose the will to live,” says Mercy. “That is why we try to uplift their spirits. We tell them that we are there to help them in whatever way possible.”

Thankfully, out of 100 children, only 17 are HIV positive. Recently, the parents of two children died. The nuns helped to place the siblings, a boy and a girl, in different institutions. “Unfortunately, both are HIV positive also,” says Ancy.

The nuns also go often to the Swandham Service Society, which is an organisation for sex workers. “We provide moral support,” says Mercy. “Sometimes, when they want small loans or need money to buy a sewing machine or a small plot of land, we try to help.”

Meanwhile, once a fortnight, on a Sunday, Ancy and Mercy return to their convent at Kalamassery. They take along a written report on all what they have done, including the money that had been collected that month, and present it to the Mother Provincial Thecla.

The other sisters are keen to know about Ancy and Mercy’s experiences. “They have a desire to venture out, but are nervous about it,” says Ancy. Undoubtedly, it is a well-structured life within the convent. Each nun is assigned a specific job. So, they will do the cooking, the washing, the receiving of visitors and administrative jobs. “But now when we are on our own, we have to do everything by ourselves,” she says. Despite this, both nuns, who were teachers for many years, say that they lead far more fulfilling lives than when they were educating the children of well-off families.

“We are contributing something to the betterment of society,” says Ancy.