A Blessed Pair of Hands 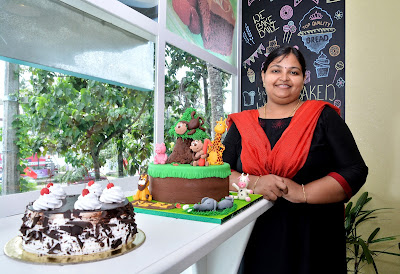 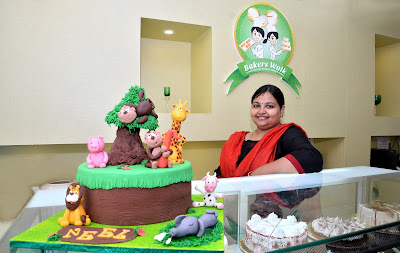 Lakshmi Sreedhar makes such wonderful designer fondant cakes that customers are reluctant to cut it, let alone eat it

On a cloudy day in March, 2015, Lakshmi Sreedhar sat, along with her husband and two assistants, in a tempo, her heart beating at express speed. Beside her, covered in plastic and tarpaulin, was her largest creation: a 5' 8” cake. The driver, as instructed, drove the vehicle at the speed of a tortoise. The distance to the hotel from her production unit was eight kilometres. The road was full of potholes, dust, gravel, and, not to forget, speeding cars, buses and lorries.

Thankfully, they made it without a mishap. The cake was in the form of an off-the-shoulder wedding gown. The order was given by a Muscat-based couple for the wedding of their daughter Bhavana Ashok.

From the head till the hip, there were two layers each of chocolate, orange, strawberry and pista. From the hip downwards, there was only icing.

Expectedly, the guests looked dazed. And, more so, the bride. “As soon as I saw the cake, while I was walking down the aisle, I told my mom, 'It's mind-blowing!',” says Bhavana. “Questions ran through my mind: 'Is it possible for someone to create a cake this big and beautiful?'”

But it was not easy to make. Through Whatsapp, the parents sent the photos of their daughter's wedding dress to Lakshmi. She needed the help of two assistants, and her brother, Ram Mohan, but even then it took around 75 hours.

In the end, Bhavana cut a piece from the shoulder and ate it. “It was yummy,” she says.

However, not every order is smooth sailing. Once, Lakshmi was transporting a three-tier 50th anniversary cake from Kochi to Palakkad, a distance of 145 kms in a car. On the highway, her husband, Sreedhar, had to apply the brakes suddenly.

As a result, the top tier just toppled over. “I got a shock,” says Lakshmi. However, she managed to set things right in such a way that nobody, except the customer, noticed anything amiss.

Lakshmi’s speciality is fondant designer cakes. “A designer cake should look good, taste well, and match the desires of the customers,” she says. Most of the parents of children usually opt for Disney figures like Donald Duck and Mickey Mouse. “Recently, parents have started asking for characters from [Hollywood hit animation films] 'Minions' and 'Frozen',” says Lakshmi

She has celebrity customers, too. One of them is Mollywood star Jayasurya.
For the promotion of a film called 'Aadu' (Goat), he ordered a cake, which Lakshmi made in the shape of a goat. Says Saritha, Jayasurya’s wife: “It was a 3D cake, flavoured with butterscotch and loaded with crunchy praline. It was so realistic that we did not want to cut it (this happens every time Lakshmi bakes a cake for us). The entire crew was so excited on seeing the cake. And the taste turned out to be delicious. I must say Lakshmi has blessed hands.”

Asked whether she feels sad when a cake is cut, after so much of work, Lakshmi says, “What compensates is the joy in the eyes of the people who eat it.” Her cakes range in price from Rs 4500 to Rs 1 lakh.

Lakshmi puts a lot of emphasis on quality. “I use the best ingredients,” she says. For colours, she imports it from abroad. Her favourites are Americolours and Kopy Kake.

“The problem with Indian edible colours is that there are all types of chemicals in it,” says Lakshmi. “And even if we use a detergent to wash our hands, it will not go off. However, for foreign colours, all you have to do is to wash your hands.”

Undoubtedly, Lakshmi is in the grip of a passion. Her life changed, when, one day, she went looking for a cake for her son Arjun's first birthday. But she could not find any good ones. That was when she decided to make one on her own. And never stopped. In December, 2014, with the support of her husband, and family members, she set up a shop called 'Bakers Walk' in Kochi.

And today, Lakshmi is revelling in the creative work that she does. “It is far more enjoyable than working in a bank, which I did for a few years,” she says.