The Ups and Downs of the Human Heart 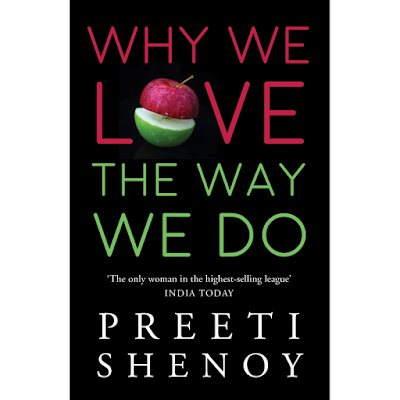 Best-selling author Preeti Shenoy deals with emotions in relationships in her latest book, 'Why We Love The Way We Do'

At a book signing event, in Chennai, a young girl came up and gave best-selling author PreetiShenoy a gift. “I put it in my bag and forgot about it,” says Preeti. “My mind was focused on signing books and meeting people.”

However, three days later when Preeti opened her bag, she got a shock. The gift was a gold-plated Ganesha. “I was overwhelmed,” she says. Somehow, she managed to trace the young girl on Facebook and conveyed her thanks.

Apart from gifts, Preeti receives thousands of e-mails every month. And they are from people who ask the author for advice on how to go about having relationships. They feel that Preeti is an expert because she has written in detail on this subject in five novels and two non-fiction books, all of which have been best-sellers.

In fact, her just-released book, 'Why we love the way we do', published by Westland, reached No 4 in the best-seller charts within a short while.

It is a collection of her column articles, which she continues to write for a national newspaper. With an average length of 700-800 words, it talks about a wide variety of subjects: finding love, dating, marriage, break-ups, gender differences, communication, infidelity and sex.

So, Preeti is well placed to talk about the trends in middle-class society in India. “The very young are disillusioned about marriage,” says Preeti. “In fact, most youngsters do not want to get married. Because they feel that what they can get from a marriage, they are getting without. Pre-marital sex has become widespread.”

So how do parents react? “Some turn a blind eye,” says Preeti. “Others impose restrictions. But that does not work because children will find 15 other ways to do what they want. The best method is to have an open and healthy friendship with their children. That will enable the children to open up and talk on all subjects, including sex. In fact, a parent can advise their children that it is always better to have sex at 21, when they are mature enough, and not at 15, which is what is happening now.”

As for adults, it has become so much more easy to have an affair. “Today, because of technology, you can sit in India and begin an affair with a person in Japan. The very fact that there were lakhs of Indians on the Ashley Madison [adultery] web site shows that there is an active desire for extra-marital affairs.”

The Bangalore-based Preeti talked about all this on a recent visit to Kochi for a book signing and surprised people when she spoke in fluent Malayalam. “Both my parents grew up in Kerala,” she says. “But I lived outside. But, as children, we would come often to Kerala during our vacations.”

A Goud Saraswat Brahmin, Preeti's life changed in 2006 when her father, KVJ Kamath, passed away, suddenly, at age 66 through a cardiac arrest. “I felt numb because I was very close to my dad and would speak to him every day,” she says. “He was my hero.”

To get over the shock, Preeti began a blog. This turned out to be popular, and thereafter, her writing career took off. Asked to analyse her popularity, Preeti says, “Readers tell me that my style is simple, easy to read, and touches the heart. They have also told me that when they start reading my book, before they realise it, it is over.”

(The New Indian Express, Kochi and Thiruvananthapuram)
at January 21, 2016