Keeping an Eye on the Game 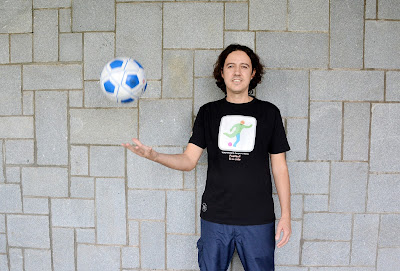 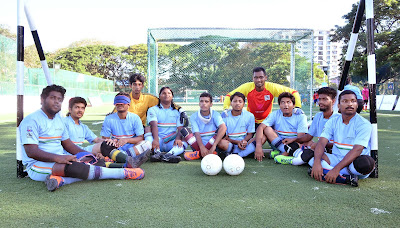 It was a sunny afternoon on September 17, 2008, at the Olympic Green Hockey Field during the Paralympic Games at Beijing. But the Chinese spectators were tense. In the blind football five-a-side final between China and Brazil, the score was tied 1-1. Elias Mastoras from Greece was the referee.

Suddenly, just 40 seconds from the end of the match, the Brazilians got a penalty. Marcos Felipe stepped forward, took the shot, and beat a diving goalkeeper Xia Zheng. “The goal broke Chinese hearts,” says Mastoras. Later, there was jubiliation because just three years ago, Mastoras had gone to China to introduce the game.

“Within such a short time, they were able to reach the final,” says Mastoras. “It gave a big impetus to the sport in Asia.”

Mastoras recounted this anecdote during his recent visit to Kochi, where he had come to conduct a referee and instructors seminar. Around 20 players, instructors and referees from Delhi, Rajasthan, West Bengal and Kerala took part.

“The aim was to explain the blind football rules and strategies,” says Mastoras. The course was organised by the Society for the Rehabilitation of the Visually Challenged (SRVC).

“We asked Mastoras to come because he has been the referees' official at the past few Paralympics and is also coordinating the Referee and officials selection for the Rio Paralympics in August, 2016,” says Sunil J Mathew, Secretary, SRVC, and Head Coach, Indian Blind Football Team.

Adds MC Roy, Project Head, SRVC and Indian team manager: “The idea is to build a strong referee unit in the country to strengthen the game at the grassroots.”

Apart from talks, multi-media presentations, and question-and-answer sessions, there were demonstration games held at the football ground of the Regional Sports Centre. “This gave referees the chance to officiate games, so that Mastoras could point out their mistakes,” says Roy.

The rules are simple: When a defender approaches a player, who has the ball, he has to keep shouting the Spanish word, 'Voy' (I am here). Mastoras says that most players forget to do this, “The players will tell me that they said 'voy', but nobody could hear it,” says Mastoras. “So they have to learn to say it out loudly.”
To be a good referee in blind football, you need to have experience. “In regular football, even if a referee is 10 metres away, he can control the game,” says Mastoras. “But in blind football, he has to be very close to the players, so that he can hear the 'voy'.”

The reaction to the seminar has been positive. “It was an eye-opener for us,” says National Referee K. Gokulan. “We have been introduced to a different level of sporting skills that the differently-abled possess and will look to improve their game further.”

Incidentally, the SRVC was instrumental in setting up the Indian team in 2013. Today, the country is ranked 28th in the world.

"We have been working closely with the Paralympic Committee of India and the Indian Blind Sports Association to promote the game as much as possible," says Roy.