Capturing Wildlife in All its Glory 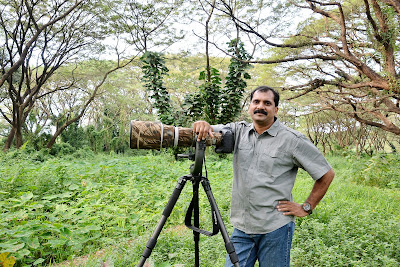 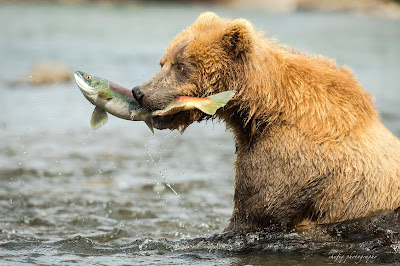 Shefiq Basheer Ahmmed, the winner of the 2015 Kerala State Wildlife Photography Award, talks about his experiences

Photos: Shefiq Basheer Ahmmed by Ratheesh Sundaram; a bear having a salmon at the Kronotsky State Natural Biosphere Reserve, in the Kamchatka Peninsula, Russia.

Photographer Shefiq Basheer Ahmmed, 44, was shivering. This was a surprise, because he was wearing four layers of thermal clothing, a sweater, thigh-high gum boots and a knit cap. The sky was a crystal blue on a late September morning, although the temperature was minus three degrees centigrade below zero.

Shefiq was at the Kronotsky State Natural Biosphere Reserve, in the Kamchatka Peninsula, Russia. But soon, Shefiq forgot the cold as he watched thousands of salmon fish swim into the Kurilskoye lake. “It was a stunning sight,” says Shefiq, a Kochi native, who was in the news recently for winning the 2015 Kerala State Wildlife Photography award for the second year in succession.

These fish had come for spawning all the way from the Pacific Ocean. Under the strain of laying the eggs, between 3000 to 5000, the silver-coloured fish becomes reddish and purple. Later, they all die. “The salmon is one of the few extreme cases where they put everything into reproducing just once, and then they die almost immediately,” says scientist Steve Steve Lindley, a director of the US National Oceanic and Atmospheric Administration.

They die in another way, too. Around a thousand bears come from the surrounding wilderness for this annual event. They eat around 150 fishes a day.

And capturing all these events is Shefiq with his Canon EOS-1D X with a 500 mm lens. Shefiqwas the official photographer of a 14-member team from the Bangalore-based Wildlife Conservation Society of India, but his trip was sponsored by a Dubai-based company, Desco.

He has travelled to other places, too. They include Tanzania, Kenya, Indonesia, Sri Lanka, Malaysia and all over India. Apart from photographing 500 varieties of birds, he has shot leopards, elephants, wild dogs, deer, the lion-tailed macaque, brown bears, squirrels and tigers.

For Shefiq, the tiger is the most impressive. “Unlike a lion, a tiger can kill a 1500 kg wild bull on his own,” says Shefiq. “The tiger has courage, speed and power. It is the only animal who can change direction in mid-jump in order to nab a prey.”

In more than 15 years of shooting wildlife, Shefiq has never fallen prey to the animals. One reason is because he wears a green camouflage shirt, trousers and cap. He also covers his equipment with the same cloth.

And there are other reasons, too. “Whenever an animal, be it a tiger, an elephant or a leopard sees me, I always stand still,” he says. “We will exchange looks for a minute or so. I don't flinch even for a moment. In the end, they will walk away. All animals are scared of human beings. This may be a fear instilled by nature.”

Nevertheless, in the photos, the animals look relaxed, stunning and eye-catching. Many are unaware that they are being photographed. And Shefiq follows a simple method to get good images. “Whenever I go into the forest, I always show reverence to the birds and the animals,” he says. “And I have learned to be patient.”

To get a shot of a Great Hornbill bird in a forest in Kerala, he sat without moving from 9 a.m. to 3 p.m. Unfortunately, it was an area infested with leeches. “By the evening, my arms and legs were full of bloody scars,” he says. “But I managed to get a good photo.”

When he is not in the jungle, on most mornings, from 7 a.m. onwards, Shefiq can be seen at the open ground, near the Motor Vehicles department, at Kakkanad, a Kochi suburb. He is an inspector, who monitors driving tests for those who want licenses. But after two weeks, the urge to go to a forest arises. So, he will take one added day to his weekly leave and heads off.

“Inside a forest, there is so much of fresh oxygen that you feel refreshed,” he says. “You can walk 15 kilometres without getting tired. Whereas in the city, because of work stress and depleted levels of oxygen, you get tired a lot more easily.”

Asked about his future plans, he says, “I want to take images of the snow leopard in the Himalayas, as well as the humming bird, of which there are 51 types in Costa Rica.”
at January 04, 2016