Flying Through The Air 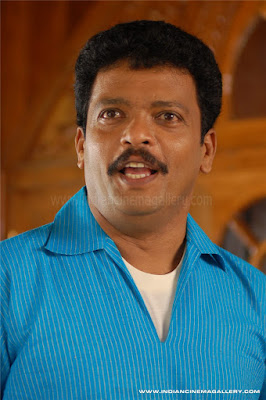 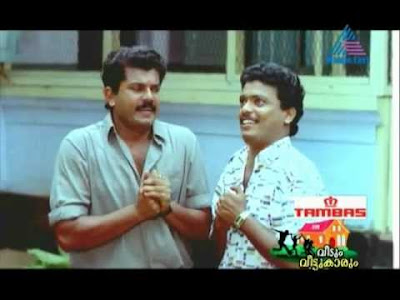 Jagadish talks about his stunt experiences in 'Vandanam' and 'Godfather'

Photos: Jagadish; Mukesh and Jagadish in a scene from 'Godfather'

In the film, ‘Vandanam’, Jagadish, who plays a police inspector, is shown pedalling hard on a cycle through the streets of Chennai. He is chasing a lungi-clad Mohanlal, who is also an inspector.

Jagadish avoids cars by a hair’s breadth, and goes up the incline of a cart. He is sent flying through the air, crashes through a Bata shoe hoarding and lands on the cycle again, which had continued to move forward.

“An iron rope which was placed around my body, broke, when I went across the hoarding,” says Jagadish. “But, thankfully, when I fell, I did not get hurt.” The advantage of using an iron rope is that, in the final print, it can be erased. On the screen, it would seem as if Jagadish is, indeed, flying through the air.

The actor also rode his luck in a comic sequence in the film, ‘Godfather’ (1991). Ramabhadran (Mukesh) goes to see their classmate Malu (Kanaka) at her home late at night and is accompanied by his friend Mayin Kutty (Jagadish). There is an enmity between Ramabhadran’s and Malu’s family.

Seeing an Alsatian dog, Jagadish hurriedly climbs up a mango tree at the location shoot in Kozhikode. Thereafter, he steps on a branch, which breaks, and falls straight down.

“Like in ‘Vandanam’, the iron rope broke,” says Jagadish. “But, thankfully, it happened when I was midway. Nevertheless, I hit the ground, which was a mix of mud and stones, with great force. For about twenty seconds, I was unconscious. When I opened my eyes, I was surrounded by all the people on the set. They thought I was seriously injured. But, by the grace of God, nothing happened to me.”

Even though the directors Siddique-Lal offered to stop the shoot, Jagadish said that he was ready to carry on.

When the fight master complained to the Tamilian who was handling the ropes that it was of poor quality, the latter said, “How can you say that, Sir? These ropes have been used since the time of MGR [superstar MG Ramachandran].”

Looking back, Jagadish says that he has also made foolish mistakes. In the film, ‘Kunukkitta Kozhi’, in which he plays the hero, during a fight sequence, in a saw mill, three villains push his head perilously close to a circular saw blade, which was turning at high speed.

“I realise now it was a big mistake to risk my life like that,” he says. “One wrong push and my neck would have been cut. This is what I tell youngsters nowadays: don’t take too many risks. Always remember that cinema is make-believe. There is no need to attempt dangerous stunts on your own. The actor Bharatraj broke his spine because of a stunt sequence and never acted again.”

And no Malayali movie fan can forget the tragic death of Jayan. While shooting a stunt sequence for ‘Kolilakkam’ (1980), the helicopter he was travelling on crashed.

“In James Bond films, there are so many stunning action scenes, but it is always done safely,” says Jagadish. “However, the good news is that we are importing a lot of safety equipment. So, it is much safer these days than it was during the 1980 and 90’s.”

(The New Indian Express, Kochi, Kozhikode and Thiruvananthapuram)
at January 07, 2016