Using a Not Much-Used Language 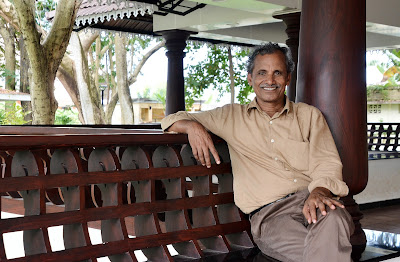 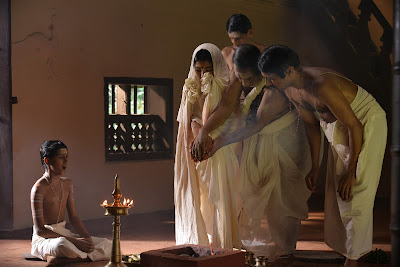 G. Prabha's film, 'Ishti', based on the Namboodiri community, has been made in Sanskrit

Photos: G. Prabha by Ratheesh Sundaram. A scene from 'Ishti'

One morning, in October, 2015, film-maker G. Prabha went, with a sinking heart, to the Perumthrikkovil Siva Temple, on the banks of the Muvattupuzha river in Kerala. It had rained heavily the previous night. And, as he feared, the set was flooded. “The scene was a fire ritual,” says Prabha. “We used buckets to remove the water. But the scene could not be shot in the way that I wanted.”

The film, 'Ishti' (Search for the self), will be released in end-January. And the most unusual aspect is that it is a Sanskrit film. That is because Prabha has a deep love for the language. For more than 20 years, he was a teacher of Sanskrit, as well as the Head of Department, Oriental Languages, at Loyola College, Chennai.

“Till now, the few Sanskrit films that have been made have been religion-based,” says Prabha. “So, I wanted to do a story with a social theme. I felt that this would be more acceptable to the Malayali audience.”

Prabha was inspired by the works of V. T. Bhattathiripad, a critic, whose books highlighted the regressive customs of the Namboodiri community for hundreds of years. Here are some rules: Only the eldest Namboodiri male could marry. In fact, he could have three or four marriages.

“The other brothers could not marry at all,” says Prabha. “They also had no rights to property or wealth. In fact, Bhattathiripad once said that it is better to be born as a dog or a cat than as a second or third brother.”

In the film, set in Kerala, during the 1940s, one of Mollywood's much-respected veterans, Nedumudi Venu plays a Vedic scholar by the name of Ramavikraman Namboodiri, 71.

According to Venu, Ramavikraman's primary desire is to be regarded as a top Namboodiri by doing all the rituals. “He is ready to spoil his relationship with anybody to achieve this,” says Venu.

Ramavikraman's third wife, Sreedevi, 17, is rebellious. She has learnt to read and write, and teaches Raman, the eldest son of Ramavikraman. “This does not go down well with Ramavikraman, who suspects they are having an affair,” says Venu.

A group of Vedic scholars question Raman and Sreedevi and finds cause for suspicion. Thereafter Ramavikraman sends his son out of the house. In response, Sreedevi tells the scholars, “Learning Vedic hymns and wearing the sacred thread are meaningless. First, you should be a human being. It is only then that you can practise truth and righteousness." Following that, she too leaves the house.

Asked why he decided to take up the role, Venu says, “In my early years, I had acted in a Sanskrit play by [the great playwright] Kavalam Narayana Panicker. I am not fluent in the language, but I am familiar with it. 'Ishti' is a rare attempt to do a film in Sanskrit. So, I wanted to be a part of it.”

But there is scepticism about whether a Malayali audience would be able to accept a Sanskrit film. “When the viewers hear the language, along with the visuals, they will be able to understand it,” says Venu. Prabha feels that ‘Ishti’ will attract Sanskrit-lovers in India and abroad.

So, the director is preparing to send his film to various international film festivals all over the globe.