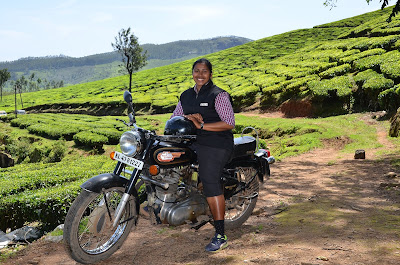 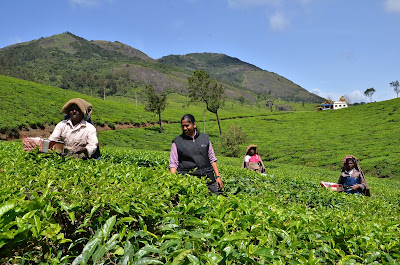 Ammu Joseph is the only woman currently who is working on the field in the tea plantation industry. She talks about her experiences at Devikulam, Munnar

It is a sunny morning in Devikulam, near Munnar. The sky is an azure blue. A steady breeze is blowing. In the distance, there are rolling hills. Ammu Joseph, 26, sets out on her Bullet Enfield. She is wearing a black jacket, half trousers and canvas shoes. Soon, she is riding through rough gravel up a steep road at the Lockhart Estate at Munnar belonging to the Harrisons Malayalam Limited company.

After a while, she stops at a place where a group of women workers are plucking tea leaves. Ammu asks, “Everything is fine?” Since there is a guest present, they nod politely.

What is unusual about Ammu is that she is the only woman currently who is working in the plantation industry in Kerala as an assistant manager. “I knew it would be a challenging job,” says Ammu. “It is a male-dominated area. I knew as a woman I would not get any special considerations. I would have to stay alone and travel on my own.”

But a year on, Ammu, who has a BSc (Forestry) degree from Kerala Agricultural University has adjusted to the work. Asked her job profile, Ammu says, “I am handling crop management, pest and disease management, harvesting and agricultural operations.”

However, her most important job is to deal with the labour force, the majority of whom are women. “There is a labour strength of 400 spread across two plantations,” says Ammu. “They stay in the labour colonies within the estates. Once a month there is a meeting and we thrash out the problems that they are facing, especially in the colonies.”

The women labourers are happy. “Ammu is a very understanding person,” says Mary, 58, a fifth-generation worker. “Because she is a woman she can understand us much better. Also, we are able to relax and have a heart-to-heart conversation with her.”

But it does not mean that Ammu is always soft. Once an elderly lady Radha complained to Ammu that her husband would drink a lot and physically harass her. “When I met him, I asked him what the problem was,” says Ammu. “He suddenly got scared when I confronted him. They are not used to women speaking with authority. Thereafter, he stopped disturbing Radha.”

Her reputation for being tough is spreading. A worker called Anjappar would also harass and shout at everybody. “But when people told him that they would inform me about his behaviour, he would go quiet,” says Ammu, with a smile.

It has been an eye-opening experience for Ammu, who grew up in Thrissur. “In the city, we are not bothered about the lives of other people,” she says. “But in the hills, everybody is closely linked to each other. They celebrate jointly. When a death takes place, everybody cries. They have lived and worked together for so many years. Hence, there is an intimacy.”

Since they work so closely with Nature, they have a deep respect for it. “Before they set out for work, they say a prayer to Nature,” says Ammu. “The people have a belief that they need Nature, today, tomorrow and the day after.”

They are also adept weather readers. “Just by observing the sky, the direction of the winds, the sunlight and the moon, they can predict the weather,” says Ammu. “They know when it will rain at least two days in advance. However, these are the skills of the senior generation. I don’t know whether their children will have the same aptitude.”

Asked whether, like the workers, she believes in Mother Nature, Ammu says, “There is some power in Nature. I don’t want to call it God. Earth has a power to look after us. If I am stuck somewhere in the night I always have a feeling that Mother Nature is looking after me. So, I have never felt scared. On the other hand, I feel a lot bolder these days.”

Incidentally, work on the estates starts at 8 a.m. and carries on till 11.45 a.m. when the leaves are weighed. There is a lunch break for one hour. Then they will resume work from 1 pm till 5 p.m. Apart from a basic pay, workers are given additional payment according to the kilos they collect. “On an average, each worker collects between 50 and 100 kgs every day,” says Ammu.

For Ammu, the work is physically taxing. In many areas, the Bullet cannot go through. So she has to walk a lot. “The toughest time is during the rainy season,” she says. “The whole day I am in the rain, wearing a raincoat. Even then it feels very cold. My shoes get wet. I also get wet sometimes. The rain is so strong. But when I stand with the workers, they feel energised and so do I.”

And her energy and boldness are being appreciated. “Ammu has made a difference,” says Jobsy Thomas, General Manager-Operations (High Range Group). “I feel that she communicates more transparently and openly than I, as a male, would be able to do so. At the same time, she has to get the work done. So it is a tough balancing act. But she has been doing quite well. Kudos to her.”

(The New Indian Express, Kochi, Thiruvananthapuram and Kozhikode)
at July 16, 2018