A Symbol Of Hope And Pain 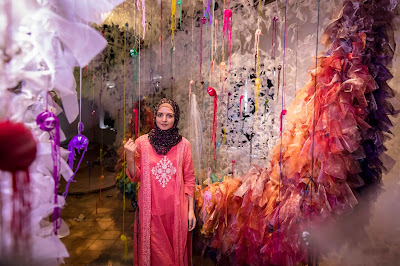 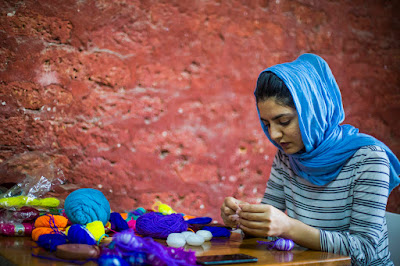 As the visitor stepped into the first-floor hall at the Pepper House at Fort Kochi, he was immediately struck by the installation placed in the middle. It was shaped like a large barrel, with pieces of fluffy cloth surrounding it. It looked like snowflakes, but it was actually a fishing net.

The other materials used included floaters, translucent fabric as well as fishing hooks. Within the installation, there was a boat in multi-coloured sheaves of cloth.

High up, the ceiling had blue lights. It gave off a feeling of tranquility and apprehension at the same time.

The 30' x 10' installation is called 'Trapped, not defeated'. “This is a symbol of my own psyche,” says the Kashmiri artist Insha Manzoor. “I feel trapped by the memories and emotions and the conflicts which are taking place in Kashmir.”

Asked why she tied up the net in knots, at different places Insha says. “When we go to sacred places in India, people tie knots with thread and fabrics on the windows of the holy structure. My mother also used to put a knot in her saree. It is a symbolic sign of wishes that have not been fulfilled. So, the knot is a symbol of hope, as well as pain.”

As people gaze at the work, soft meditative music can be heard on the sound system. Soon, the clear voice of Insha can be heard as she recites a poem:

'There’s a light that shines in the darkness.
There’s a destiny waiting at the end of the road.
There’s meaning in the middle of this emptiness.
There’s a reason you’ve been asked to carry this heavy load.'

“This is a poem written by the American poet Justin Farley,” says Insha, who also recited a few lines from the great Persian poet's Rumi's book of poems, 'Masnavi 1'.

Insha did not have to go far to seek inspiration for her work. Serving a one-month residency given by the Kochi Muziris Biennale, Insha would come to her studio on the first floor of Pepper House. When she gazed out of the window every morning and evening, she would see the fishermen do their work in small boats in the backwaters.

“It made me feel nostalgic as I remembered the shikharas (houseboats) on Dal Lake [in Srinagar]. Boats, for me, are a metaphor about the journey of life,” she says.

Even as the 26-year-old is adept at making installations, Insha also works in mixed media, acrylic, fabric, textiles, threads, and beads. She also makes videos on different subjects. “My themes reveal a desire for hope and a world without conflict,” she says.

And she is a precocious talent. At age 13, Insha, who is originally from Mattan in Anantnag district, held her first exhibition. Thus far, she has held numerous solo and group exhibitions. She has done a four-year course in Fine Arts from the Institute of Music and Fine Arts, Jammu University.

Insha also did a two-year Master’s degree of Fine Arts (Painting) at Visva-Bharati University at Santiniketan. “It was while staying there I came across many international artists and their works,” says Insha. “It was an eye-opener for me.” At present, Insha is doing a Double-Master’s degree in painting at the Royal College of Art London. She got entry by availing of a career development loan from JK Bank as well as a grant of Rs 20 lakh from the Kashmir government.

Meanwhile, at Kochi, when she would tell people that she is from Kashmir, their eyes would widen in wonder. “They told me that Kashmir is a paradise on earth, and I would agree,” says Insha. “Then they asked me about the problems that are taking place and I would talk about that. It was heartening that many showed empathy for our difficulties.”