Memories Of A Family Helper 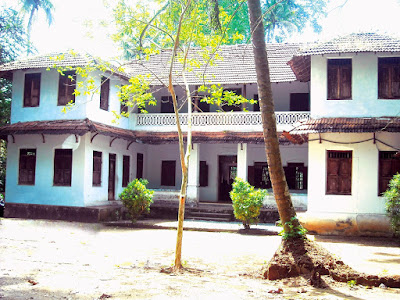 Photo: The ancestral house at Muvattupuzha

The other day my aunt sent a WhatsApp message in our family group: 'Pappi, who was with us at Muvattupuzha [Kerala] passed away. The funeral is at Neercode. Please pray for his soul'.

As soon as I read it, my mind immediately went to back my grandparents' house in Muvattupuzha. I would spend my summer vacations there with my mother and siblings from our home in Kolkata.

The back courtyard of their house was long and narrow. Across it, there were several trees, apart from a cattle shed, and a hen’s coop.

One day, when I was ten years old, while I was exploring the area, suddenly I saw a snake lying motionless on the ground. It was yellow in colour with black stripes going like a spiral all along its body. I looked at it stunned. Then I screamed and sprinted away to the kitchen where my grandmother was supervising the cooking and told her about it.

She immediately called the helper Pappi, a short man with thick biceps and shoulder muscles and possessing a vibrant energy. He strode out towards the courtyard, with a stick in his hand. But by this time the snake had moved away. After that, for days, I was afraid to go to the courtyard. My grandmother and Pappi laughed, but I did not want to take the risk.

This Pappi: I remember him taking me for a walk to a place in front of the town's bus terminus, where our family had some property. We had to climb steps, cut into the slope of a hill, reach a tin door, and go in. All around were trees and a large building in the distance.
Pappi would use a shovel to clear wildly-growing grass, plants and bushes. As for me, all I did was to stand and stare and sometimes slip into a daydream.

My mother told me that when my grandfather was suffering from glaucoma, and could not see properly, Pappi would walk in front of him wearing a white shirt. My grandfather would aim his torch at Pappi's back and that would enable him to get his bearings when he was on his way to church.

The years went past. Then on July 22, 2001, my grandmother passed away. Pappi had come for the funeral. When I saw him, I was shocked. Pappi had become thin, frail and stooped.
The contrast with his younger days was stunning. Somehow, even now, when I recall that image, I feel a stab of pain.

And then I realised that nobody can escape the circle of life: the blossoming of youth, a productive middle age, followed by a frail old age and, finally, death.
Rest In Peace Pappi!

(Published as a middle in The New Indian Express, South Indian editions)