Rolling With The Ice 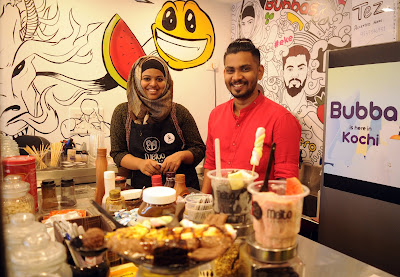 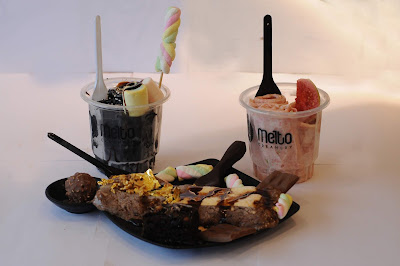 Photos: Shafeeq M and his wife Zunairah; the different types of icecreams. Photo by A. Sanesh

At the Melto Creamery in the Kakkanad suburb of Kochi, a customer comes in and orders a Guava Chilli. Chef Zunairah Shafeeq immediately gets to work. She quickly cuts up two guavas into small pieces on an ice pan. Then she pours chilly powder on it. Zunairah takes up two triangular spatulas in two hands and keeps chopping on the guavas until they become tiny pieces. It sounds like a drummer banging at high speed. Then she pours high-fat milk over the mix. Using a flat knife, the mix is now spread out like a square paste by Zunairah on the pan.

“The pan has been imported from China,” says Shafeeq M, the husband of Zunairah and the owner of the outlet, along with his entrepreneur friend Shazil Hiqma. “The surface has a temperature of minus 35 degrees centigrade. The milk freezes immediately and becomes cream.”

Then once the paste solidifies, it is cut into three rectangles and made into rolls. These rolls are placed in a plastic cup and given to the customer along with a spoon. “This is called roll ice-cream,” says Shafeeq. “We are the first to make it in Kochi. Roll ice-cream is a street food in Bangkok. We got the idea when we saw videos of it on YouTube.”

The fruit ice creams, like Guava Chilli, are very popular with older customers, as the taste of the fruit is retained. “Also, they see it made right in front of their eyes,” says Shafeeq. “So, that makes it authentic.”

Some of the fruits that are used include the jackfruit, mango, strawberry, kiwi, banana, and the avocado.

There are also ice-creams that promote health benefits. One is the Matcha ice-cream. Matcha is a premium green tea powder imported from Japan. “It has been used in the traditional Japanese tea ceremony for hundreds of years,” says Shazil. “The Matcha has an excess of amino acids and a high level of antioxidants. It helps to boost the metabolism, lowers the cholesterol, and prevents a buildup of toxins.”

Adds Zunairah: “It is very bitter but when we add chocolate or fruit, it becomes tasty.”

But the premium item of the creamery is the gold-studded Thai ice-cream. “It is a regular roll ice-cream on which we paste a gold sheet,” says Shafeeq. “This has been imported from Dubai and is made of edible gold.” But the price is a cool Rs 1000. “The aim is to highlight the brand,” says Shafeeq.

While the elders loved the fruits, the youngsters go ga-ga over the chocolate items. These include ice-creams with the Nutella Hazelnut and Hershey's Macadamia Nuts. “These are our signature items,” says Zunairah. “It moves a lot. You can also have ice-creams with peanut butter.”

And the youth are happy. Says Soumya, a 24-year-old IT professional, “Melto is a slice of heaven in Kakkanad. Nope, I am not exaggerating. This place is awesome. Good bunch of people, nice ambience and awesome ice-cream!!”

Says another young woman Vinitha: “Melto has the most innovative ice-creams.”

What also helps are the generous amounts that can be had. Three rolls are equivalent to more than 300 grams of ice cream. “Because of this, we have a lot of repeat customers,” says Shazil. “In Kochi, people want quantity as well as quality.” Incidentally, the prices range from Rs 79 to Rs 350.

Asked the charm of ice-cream, Zunairah says, “It is always a reminder of our childhood days and the happy memories associated with eating it with our parents, sibling, and friends. So ice-creams will always remain popular.”