Signs From The Universe 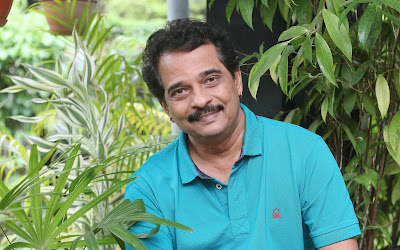 The start of the shooting of the film, 'Johnnie Walker' (1992), took place in Bangalore. It was a time when there was trouble between Karnataka and Tamil Nadu over the sharing of the Cauvery waters. Many Tamil Nadu registration cars were set on fire.

Director Jayaraj was shooting a song called ‘Minnum Palunkukal’ inside Christ College at midnight. There were 1500 junior artistes present, which included a few Tamilians. “I was filming a stage show where Mammootty was singing,” says Jayaraj. “Soon, we heard that a mob had gathered outside the gates. They started throwing soda bottles and bricks. We could see this. It was a panicky situation.”

Jayaraj stopped the shoot. Mammootty was herded inside a room in the college, while security guards stood outside. “We called for police help,” says Jayaraj. “Thankfully, the protestors did not enter the campus.”

In the Pemandu hill, near Ooty, for the picturisation of the song, 'Poo Mariyil', for the same film, many buffaloes along with carts had been requisitioned. One evening, a young helper took a few buffaloes to the lake at the bottom of the hill to give them a wash. “Somehow, one buffalo gave him a kick and the boy slipped and fell into the water,” says Jayaraj. “And since he did not know swimming he drowned. It was a tragedy.”

Throughout the shoot, there were other disturbing events. There was a scene when Mammootty was supposed to be thrown off a bike at high speed. A stunt driver did the scene. “Unfortunately, when he fell from a height, he hurt himself,” says Jayaraj. “He had to be rushed to the hospital.”

Later, in Cubbon Park, there was a night scene where a group of youngsters were riding bikes. To stop them, several beer bottles were rolled across in a bid to stop them. Unfortunately, one bike skidded and it came and hit the camera and the rider was injured too.

Jayaraj pauses and says, “I am convinced there are negative forces in the universe.”

But there are positive forces, too. In ‘Bhayanakam’ (2017), there was a scene where Renji Panicker as a postman returns home when suddenly a stray brown dog accidentally enters the frame. “When I looked through the camera lens, it seemed appropriate,” says Jayaraj. “After the first scene, we gave the dog biscuits in the hope that he would stay. Instead, it vanished.”

There were four major scenes when the dog came in and it was always at the right time. “There was one scene when the postman is leaving his place and I felt the presence of the dog would be appropriate. And suddenly, it appeared,” says Jayaraj. “Later, I felt that Nature and some power in the Universe had helped me during the making of the film.”

In the film, ‘Ottal’ (2015), while on a location search, Jayaraj decided that if he spotted somebody who would suit the role, he would select him. One day, next to a river, he saw a man rowing a boat. “And I immediately realised that he would be suitable to play the grandfather’s role,” says Jayaraj.

This film is about a young boy and his relationship with his grandfather. The boatman’s name is Kumarakom Vasudevan. He is a fisherman in real life and ended up playing the role.

These accidental discoveries were there from the start of Jayaraj’s career. “In my debut film, ‘Vidyarambham’, I wanted to place a school against the backdrop of a few hills,” he says. So, he along with a few crew members travelled around in Palakkad for several days. But they could not find what they were looking for.

However, one day, in Muttikulangara, Jayaraj was going down a road, when he spotted a narrow lane. He asked the driver to turn into it. “It led us to the perfect location I had in my mind,” says Jayaraj. “I was shocked. I now firmly believe what the author Paulo Coelho had once said: ‘When you want something, all the Universe conspires in helping you to achieve it'.”

Sometimes, the Universe also gives an advance warning. In the film, 'Kudumbasammetham' (1992), the climax was supposed to take place at the Thyagaraja Aaradhana Temple at Thiruvaiyaru. But the authorities for various reasons did not allow the shoot to take place. Monisha Unni had a role in it.

“While the arguments were taking place, we had taken shots of Monisha as she had to leave to Chennai the next day to catch a flight to Dubai for a programme,” says Jayaraj. “In fact, her last dialogue was 'I don't have the luck for anything'.”

Unfortunately, two weeks later, on March 5, 1992, Monisha died in a car accident at Cherthala. “When I heard the news, I immediately remembered her last dialogue,” says Jayaraj. “It seemed as if the Universe was telling us something. It was almost like a farewell.”

(The New Indian Express, Kochi, Thiruvananthapuram and Kozhikode)
at July 25, 2018