Providing Colours To A Dark Cell 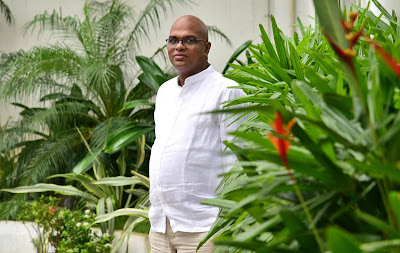 Murali Cheeroth, the noted Bangalore-based artist talks about his experiences of conducting an art camp in Tihar Jail in Delhi

In their New Delhi neighbourhood, the Naths and the Tiwaris were always arguing over one small matter or the other. One day, the son Rakesh Nath snapped. He went to the Tiwari house and using a piece of wire strangulated the elderly couple. Four relatives dropped in at different times. He strangulated all of them. The end result: Rakesh was caught and sentenced to life in prison. And he has been in Tihar Jail in New Delhi for the past fourteen years.

“He is a graduate,” says the Bangalore-based artist Murali Cheeroth, during a recent visit to Kochi. A group of six artists including Murali held an art camp at the jail recently for the prisoners; this was organised by the Central Lalitkala Akademi along with the Delhi Akademi.

“That was when I met Rakesh,” says Murali. “He told me that it was a moment's madness that made him commit the crime which destroyed his life.” Murali encouraged Rakesh to paint. He did so and Murali was impressed. “He is a realistic painter,” says Murali. “And he did some good work at the camp.”

Around 60 prisoners took part. “The aim was to change their criminal mentality and to enable them to develop an artistic sensibility,” says Murali.

And Murali discovered that many of them were talented. “I met a criminal Arjun Reddy from Andhra Pradesh,” says Murali. “From childhood, he was exposed to the sight of his father hitting his mother. In the end, the father killed the mother. Arjun was staying with his grandmother. She said something which angered him and he killed her in a fit of rage. That was how he was convicted.”

In the jail Arjun felt endlessly frustrated. “But taking part in the art classes has been a healing process for him,” says Murali. “He has gained an inner confidence.”
In his abstract work, an acrylic on canvas, Arjun has drawn himself sitting in the middle of the canvas, with his body being pulled from all sides. “Arjun now feels that when he is released he will be able to contribute meaningfully to society,” says Murali.

Murali also urged the prisoners to develop their finer qualities. “One of them could write good Hindi,” says Murali. “So I told him to become a writer.”

As for the crimes they have committed Murali says that it consisted of murder, rape and cheating. “I met five prisoners who have been involved in rape cases,” says Murali. “But two of them told me they had been framed. One young man who belonged to a lower caste fell in love with a higher caste girl, so the girl's father, taking the police's help, framed a rape case against him and got him jailed.”

Another person who appears to have been framed is Suvojit Ghosh from Kolkata. One night, he talked to a prostitute at a street corner. The next day the lady was murdered. “On the CCTV, Suvojit's meeting with the woman was captured,” says Murali. “Soon, he was framed by the police.”

But Murali was impressed by Suvojit's artistic talent. “His theme is of gods and goddesses, in the Kalighat style,” says Murali. “Suvojit participated in an exhibition where 13 of his works were displayed.”

Another prisoner who Murali worked with was a convicted in the Nirbhaya rape/murder case, which rocked the nation a few years ago. “He told me that he has enormous regrets about what had happened,” says Murali.

Reluctant to wield the brush, Murali persuaded him that this was a way to get rid of his inner demons. “Soon, he started painting,” says Murali. “He did a work of a monkey jumping across a river, followed by a thousand monkeys. These monkeys are holding flags on which are written the numerous abuses which were hurled at the rape accused when he was convicted.”

The time spent at the jail was one of intense observation by Murali. And soon, he noticed that there was a caste system in the jail. “There were conflicts between different caste members,” says Murali. “The caste system is very strong in North India. In Kerala, everybody is getting educated. But in places like UP [Uttar Pradesh], they are not, and hence they are not aware of their rights as a citizen.”

As Murali interacted often with the prisoners, they also warmed towards him. “They were very friendly,” he says. “That was because I was giving them an experience which they don't usually get in jail. And I was also shaken to come across so many lives which have been destroyed thanks to a moment's madness.”

Born in Thrissur, Murali Cheeroth did his Masters in Fine Arts from Kala Bhavan in Shantiniketan, West Bengal. He has been a full-time artist for the past 21 years. His works can be found in private collections in Japan, France, Canada, Thailand, Holland and India. He has been a two-time participant of the Sri Lankan Biennale. And has just completed an arts residency in Malaysia. Murali has taken part in numerous solo and group exhibitions. Murali has also taught at the College of Architecture, Ahmedabad and National Institute of Fashion Technology.

(Published in The New Indian Express, Kochi, Thiruvananthapuram and Kozhikode)
at July 04, 2018