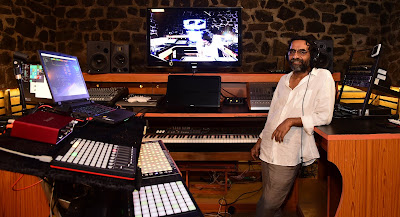 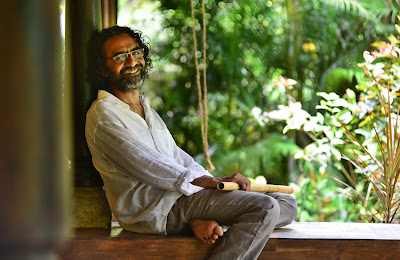 One of Kochi's leading digital musicians, Salim Nair is busy getting his first digital record ready

At his soundproof studio at Kochi, digital musician Salim Nair stands in front of his Linnstrument as well his Ableton Push2 midi controller. He is dressed casually in a white cotton shirt and grey trousers. The bespectacled musician then gently starts with a tap of one of the keys on the midi controller. The sound of a piano can be heard. This performance is seen live on Facebook.

And the name of the instrumental song is called 'When love rains'. Soon, he uses the sax, sitar and the flute. After a while, the sound becomes mesmerising; there is a rise and fall in the tone. Salim gets so involved in the playing that he keeps swaying from side to side. In his other songs, the instruments he uses include the sitar, sarangi, sarod, violin, santoor, saxophone, brass, and the keyboard. “I also use synthesized sounds,” he says. On YouTube and Facebook, he has put up over 60 song/videos.

“I call it a digital art music show,” says Salim. “[The late American writer] Susan Sontag has said art music requires the listener to put in a little bit of effort into listening. My songs have a slow and nuanced development. You can get bored. So my target audience is anybody who can appreciate music as more than just being a background sound.”

Now Salim is busy working on bringing out his first digital art album, 'Decohered', a collection of tone poems, a few of which are based loosely on the works of the late Urdu writer Faiz Ahmed Faiz.

Asked the charms of Faiz, Salim says, “His poems are very lyrical. It is very amenable to a song structure. I look for poems that can give me an emotional flow.”

A trained Carnatic musician since his childhood, Salim felt disappointed by the limitation of the traditional sound. “I used to play the flute and it is monophonic,” says Salim. “It cannot produce more than one sound.”

The other problem was the structure of Indian classical music. “Until 25 years ago, there were very specific caste-based restrictions about what you can sing and perform,” says Salim. “Most temple sanctums are closed to everybody except the Brahmins. The music was specifically created to support this hierarchical structure.”

That is the structure that Salim wants to break. “I am using Carnatic idioms and making my own rules,” he says. “Think of this: you spend 12 hours a day perfecting a song sung by composer Thyagaraja (1767-1847). What is the point of that? Express what you feel not what some singer felt 170 years ago.”

It was only when Salim, an electrical engineer by profession went to Philadephia, USA, in 1999 that he had a change of mind. While there, he realised that he could use the computer as a primary music instrument. “It has more capabilities than my single flute,” says Salim, who relocated to Kochi in 2014 and is working as a software programmer.

As to the charge that there is less soul in digital music, Salim says, “Is the violin natural? There is so much engineering that goes behind the making of a violin. On the other hand, digital music is more malleable. I am transferring what I am thinking directly. I don't have the constraints of a physical object.”