‘A lot of talk and election gimmicks’ 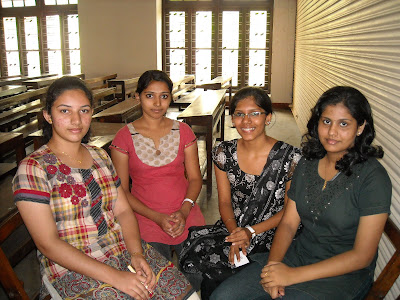 Anie Theresa Joy, Stephe Alex, Shwetha Vipin, and Lini Jolly are gathered in a classroom of St Teresa's College, Kochi. Like youngsters everywhere they radiate optimism and excitement. One reason for their happiness is that, at eighteen, they will be first-time voters in the upcoming Assembly elections. But all of them have clear-eyed perceptions about politics, government, and the tardy pace of development.

Anie says, “The government could have set up the Smart City at Kochi much earlier, instead of near the end of their five-year term. It is an election gimmick. They are trying to tell the voters that if they are voted back to power, they will do more projects like this. But I don't believe them. In any case, it is too late.”

Stephe is taken aback by the hypocritical face of the party. “The Communist party opposes capitalism,” she says. “But, surprisingly, most of the leaders have become millionaires through capitalism -- business deals and the like. They are making money for themselves. They don't care for the people. The leaders give a lot of speeches about the need to help the poor, but nothing happens. It is just talk.”

The students are also angry about the rising number of incidents of sexual harassment, molestation, and rape. “I remember when V.S. Achuthanandan was sworn in as chief minister, he promised that he would punish sexual offenders, but nothing of the sort happened,” says Shwetha. “In fact, statistics reveal that attacks against women have increased over the past few years.”

While attacks have increased, there has also been a lack of progress in many areas. “Even now, so many years after Independence, there are many areas in the state where people do not have electricity in their homes or access to drinking water,” says Lini. “People are dying, because of a lack of proper health care, while government doctors don't come to work on time. The administration is not doing anything about it.”

And for a subject that is close to their hearts – education -- they are upset by the policy of the government. “For state syllabus students teachers have been instructed to give pass marks to all those who appear for the examinations, irrespective of their performance,” says Shwetha. “It lowers the overall standard. And because these students obtain higher marks, they get admission to colleges easily. As CBSE (Central Board of Secondary Education) students, we suffer because of this.”

Says Lini: “Just because the government wants to show that Kerala is 100 per cent literate, all the students are being allowed to pass. This is literacy without any meaning. Many of these students cannot write or read properly.”

But it seems that Anie and her friends have a clear reading of the electorate. Asked about who will win the upcoming elections, they say in unison, “The UDF (United Democratic Front).” And Stephe explains why: “If you take the history of Kerala politics, no party has been elected for two consecutive terms. Within five years, people get tired of the government. They want to give a chance to others.”