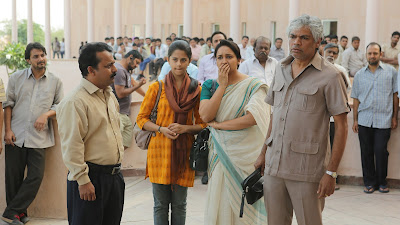 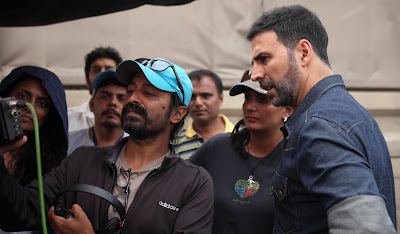 Despite a small role, Lena makes an impression in the Bollywood box-office hit, ‘Airlift’

Photos: Lena in a scene from 'Airlift'; Director Raja Krishna Menon (left) with Akshay Kumar during the shoot

In March, 2015, at Ras al-Khaimah, United Arab Emirates, a sandstorm blew up. On the sets of the Bollywood film, ‘Airlift’, director Raja Krishna Menon was thinking of packing up, but it was Akshay Kumar, who plays the hero, who suggested shooting through the sandstorm to create a sense of authenticity.

As a result, Mollywood actress Lena got an opportunity to encounter a sandstorm first-hand. “The only problem was that it took all of us two days to remove all the sand from my hair,” she says, with a laugh. Says a grateful Raja: “The actors were patient and we shot a beautiful scene which, unfortunately, I had to take out in the edit.”

This is Lena’s first role in a Bollywood film. She plays Deepthi Jayarajan, the wife of George Kutty (who is played by Kannada actor Prakash Belawadi). He is forever complaining about all the problems the Indians are facing. ‘Airlift’ is a fictionalised version of the evacuation of 1.7 lakh Indians from Kuwait when Iraq invaded the country in August, 1990.

In the film, Lena has only a few sentences to say. “I was clearly told that there would be very few dialogues, so I was aware before-hand of what I was getting into,” she says.

Says Raja: “Roles are never small or big. Lena took up a challenging role and has blown it out of the park. She is unforgettable as George's wife. She brings life to a very difficult character. I always say quality over quantity.”

Indeed, Lena impressed with her facial expressions. She was able convey powerfully her exasperation at the way her husband is behaving.

In fact, in one of the striking scenes in the film, when George Kutty complains, yet again, Akshay’s on-screen wife Nimrat Kaur lashes out, reducing Kutty to a stunned silence. Again, it is Lena’s shame and embarrassment, which are revealed through the eyes that is eye-catching.

Asked how she got the role, Raja says, “I was looking for a Malayali actor and my casting assistant brought me a clip of a film she was in. Lena was brilliant in the clip, but when I looked deeper, I realised she is quite a big star in Malayalam cinema. Anyway, I spoke with her, explained the part and she agreed to be a part of ‘Airlift’. I am really glad that she did.”

Meanwhile, when asked about the striking difference between a Bollywood and Mollywood production, Lena says, cryptically, “The budget. [Airlift had a budget of Rs 30 crore]. Everything is on a large scale. We cannot even compare.”

Interestingly, Lena has yet to see ‘Airlift’ because she is busy shooting for the Telugu film, ‘Dr. Chakravarty’, where she plays the hero’s wife. “I am told that ‘Airlift’ is doing very well in the box office,” she says. “So I am very happy about that.”

(The New Indian Express, Kochi and Thiruvananthapuram)
at January 28, 2016