A corner of Tibet 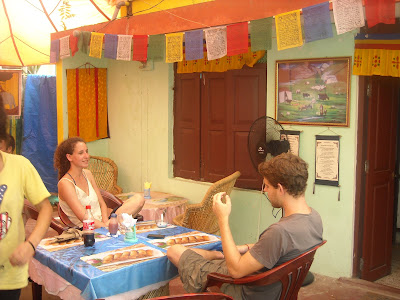 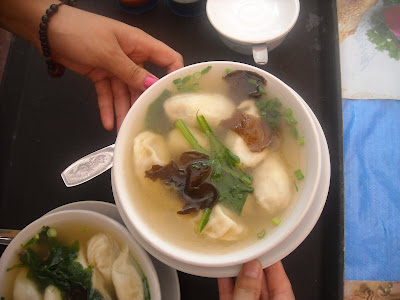 A restaurant at Fort Kochi offers traditional momos and thukpas, apart from an ambiance steeped in Tibet

Photos: The Tibetan restaurant; a plate of vegetable momos

One evening, Jenny Lee, a medical student from Seoul, South Korea, went to attend a performance at the Kerala Kathakali Centre at Fort Kochi. Just next to the centre, on the wall, there was a signboard advertising a Tibetan restaurant. Intrigued, since she had not eaten Tibetan food before, she appeared next afternoon at the restaurant.

Jenny began her lunch with meat momos. These are dumplings, made of wheat, and can be round or shaped like a half-moon. It is regarded as the national dish of Tibet. “You can put in vegetables, mushrooms, basil leaves, or meat: chicken or beef,” says chef Tenzin Jigme. “It can be boiled, fried or steamed.”

Jenny opted for the popular steamed variety. “It was delicious,” she says. “It had the right amount of spices, just like our South Korean cuisine, although it is far less than the masala found in Indian food.”

Tenzin says that momos are a lot like samosas. “The only difference is that in Indian food, there is a lot of masala and oil,” he says. “In Tibetan momos, we put a lot of vegetables like carrots, spring onion, ginger, garlic, and spinach. Then we boil it in water, and add white pepper and salt.”

Tenzing also provides a thick, red sauce. “It is made of ginger, garlic, red chillies, ajinamoto and salt,” he says.

Her appetite, whetted by the momos, Jenny opted for a meat thukpa. “This consists of a noodle soup and you can put in meat pieces or vegetables,” says Tenzin. “We put in a little bit of sunflower oil. Most of the time, we use butter or cheese.” Incidentally, Tibetan dishes start at Rs 120 for a vegetarian dish of 12 momos.

Jenny was a satisfied customer. “Yes, the thukpa was very tasty,” she says. “I will be having lots of Tibetan food in future. It is very light on the stomach.”

Tenzin gives a happy smile when he hears this. He grew up in Tibet, but fled to Ladakh, without any valid papers. From there he moved to India and worked in several top-flight restaurants in Delhi, Mumbai, Bangalore, Kolkata and Jaipur. But he always wanted to start something on his own. A chance invitation from a Ladakhi friend in Fort Kochi resulted in him coming here a few months ago.

He began the Tibetan restaurant on October 16, last year, with the help of his brother-in law, Losel, and the latter's wife-to-be, Rinchen Angmo.

“We are getting regular customers,” says Rinchen. “Many locals come, apart from foreigners. One reason is that we are next to the Kathakali centre. Many see our board and are curious to try Tibetan cuisine.”

The restaurant has been set in a courtyard of a house. There is a large black-and-white flex poster of the Potala Palace, the former residence of the Dalai Lama in Lhasa, alongside one wall. Tibetan Buddhist prayer flags hang on strings alongside another wall. These flags are said to bring happiness, long life and prosperity.

If things go the way it is, Tenzin is going to become prosperous soon.