Feeling at home, away from home 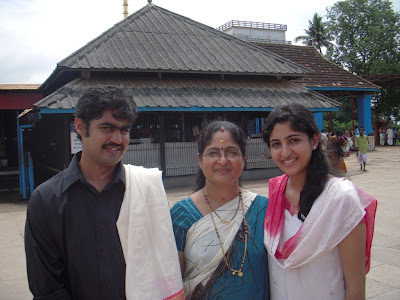 Photos: Sunanda Anavati (centre) with her children, Vivek and Deepthy at the Chottannikkara temple; the Karnataka state logo

In 1980, Srikant Anavati was working in Bangalore when he got an opportunity to be a super stockist in Kochi for the Bangalore-based pharmaceuticals company, Micro Labs. He decided to take the plunge. And 31 years later, this former president of the Kannada Sangha Cochin has an office behind the Income Tax building on IS Press Road, where he runs a clearing and forwarding agency for pharmaceutical companies.

“I like it in Kochi,” he says. “First of all, it is a green environment. Compared to Bangalore, the pollution is much less. As far as business is concerned, this is a state where you can sell anything. In Karnataka, the individual purchasing power is less, especially in the rural areas. Kerala is a forest of consumers in the urban as well as the rural areas.”

At this moment, there are about 250 Kannadiga families residing in the city. But the vast majority belongs to a floating population of people who have come on transfers in bank jobs and private companies. “The number of permanent residents is only 20 families,” says Srikant.

Srikant, who is originally from Sirsi in north Canara, married Sunanda, from the same place in 1984. “I have adjusted to my life here, although it took me some to get used to the hot weather,” says Sunanda. “I like to watch the films of Mohanlal and have also learnt to read and speak Malayalam.”

The couple has two children, the son, Vivek, 24, is doing his M.Tech in Kozhikode, while the daughter, Deepthy, 20, is studying fashion designing in Chennai.

Like Vivek and Deepthy, Vijay Kumar V. Gudi, 30, a web designer, also grew up in Kerala. His family is originally from Bagalkot in North Karnataka. “I am half Malayali and half Kannadiga,” he says. “But I feel more at home in Kerala, because most of my friends are here.” However, Vijay does not know how to read and write in Malayalam or Kannada.

Srikant feels sad about this. “The second generation is unable to read the wonderful literature of Kerala or Karnataka,” he says. However, the parents ensured that they always spoke Kannada in the house, so that their children could become fluent talkers. “Otherwise, it would have been embarrassing when we meet our relatives and friends in Karnataka,” says Sunanda. “We go twice a year for our parents' ceremonies for a week or so.”

What they miss most about their life in Kerala is that they are unable to attend the numerous family functions and festivals that take place in their home state. But on a recent Sunday, there was a one-day cultural event at the Town Hall. “Once a year, artistes arrive to showcase our Kannada culture,” says Shivanath Kowdi, the president of the Kannada Sangha Cochin. “This is sponsored by the Karnataka state government. The aim is to create a better understanding of our culture in Kerala and to provide cultural entertainment for those Kannadigas who live outside the state.”

So what are the plus points of living in Kerala? “The people are very nice,” says Girish N. Phadke, vice president of the Sangha. “In the offices they work efficiently. They arrive punctually and know their responsibilities and discharge it efficiently.”

But there are negative aspects. “Here the mind-set is that once a business has been started by somebody, the profit should be shared by everybody, but the loss has to be borne only by the proprietor,” says Srikant. “So they will resort to strikes easily.”

But Srikant has many friends, thanks to his business contacts, and he relishes the relationships. “I have no regrets in settling down here,” he says. “I am enjoying my life. There is a lot of freedom here.”