A mirror to society 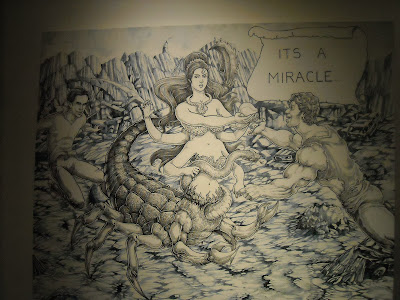 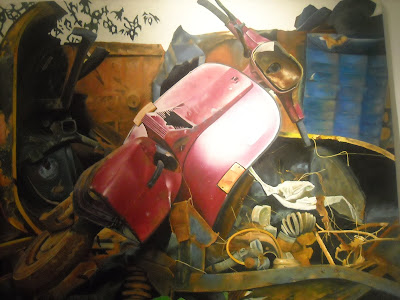 Final-year art students of the RLV College, Tripunithara, express their views of society and current trends through powerful works

The body is of a scorpion with a long tail, and powerful claws, while where the head should be, there is a long-haired woman with four breasts and an equal number of hands, holding what seems to be a piece of fruit. She is unsmiling, while the muscular man who is receiving the gift has a wide smile on his face. Buses and vehicles on either side are in a state of rust and disrepair. There is a serpent, with a forked tongue, coiled around the woman’s body.

Abraham Alex’s ‘Wasteland Chronicles: Miracles and Mysteries’ is a remarkable painting that makes the viewer pause and stare. “I have created a fantasy world,” says Alex. “These figures have been taken from my imagination and I wanted to give the work an apocalyptic feel.” But the spark has been the many stories that he has read in the Puranas, as well as Greek myths. Alex is one of eleven final-year Masters of Fine Arts students of the RLV College of Music and Arts, Tripunithara, taking part in the ‘Fly Daily to Dreams’ exhibition at the Durbar Hall.

T.S. Prasanth’s acrylic on canvas, ‘Survival’ shows a crowded market scene. It is peopled with numerous characters: So there are people selling vegetables, fishes and bananas. A group of men and women stand around and have a discussion. A driver pushes a stalled auto-rickshaw. At one side, another man blows his nose. And, in a contemporary touch, there is a film poster of Mohanlal in ‘Casanova’. It is a wonderful representation of the teeming daily life in overpopulated Kerala. “I went to the market in Aroor and took a photo,” says Prasanth. “Thereafter I did many sketches and then did the painting.”

Amal Francis’ ‘Uncaptured’, a mixed-media work shows the inside of a temple, done in a remarkable 3D style. The pillars and the walls have intricate designs. And all around are several people wearing masks. On the top of one pillar, there are surveillance cameras. “Today, people wear masks when they step out in public,” says Amal. “They are afraid to show their true faces. The cameras indicate that there are others who are watching you all the time.”

T.R. Lasya has been doing some watching on her own. In her work, 'City Dreams' there is a barren landscape, with only lighted street lights. In the sky, several crows are flying about. While on a window sill, two leafless plants are growing. “I live on Willingdon Island,” she says. “This is a view from my room. There are no trees around. All I see are some plants. And that is disturbing to see.”

Anoop Kumar V.S. also focuses on a similar worry. In his 'Nostalgic feelings of a physical reality', there is a beautifully rendered front portion of a maroon Honda Activa with rusted wheels lying on a scrap heap. Whatever man makes is in a state of rust and decay, while at the bottom, there are three translucent green leaves, indicating ever-present and fecund Nature.

It is an impressive display of talent by these youngsters, which also include works by Anoop S. Kalarickal, Dileep K.U., Sajo Joseph, Soumya Thomas, Sreeju Radhakrishnan and Soumya N.S. Nearly all the paintings are striking and powerfully done. Says K. Sidharthan, head of the department of painting, RLV College: “This is a very talented group. What I like is their keen awareness of social trends, and the desire to produce work reflecting contemporary trends in art.”