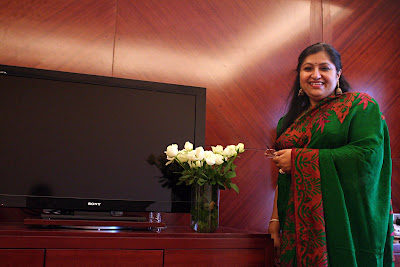 Prabha talks about her 42-year marriage to the legendary singer K.J. Yesudas

By the time Prabha Abraham was in Class 9, she had become an avid fan of singer K.J. Yesudas. “I would listen to all his songs,” she says. When her uncle, V.K. Mathews, came to know about this, he dropped a bombshell: he was a friend of Yesudas. In Chennai, where he had gone to do his studies, he would meet Yesudas at a canteen where Kerala food was being served. Soon, they became friends.

“I kept pestering my uncle to bring him home,” she says.

And then, one day, in 1967, right in the middle of her Class 10 exams, Yesudas agreed to come to their hilltop home at Jagathi, Thiruvananthapuram. “I could see the white Ambassador car come up the hill,” she says. “The car turned right, to enter the driveway, and there was Chachen [Yesudas] sitting at the back, next to the window. Suddenly, he ran his hand through his thick black hair. I have never forgotten that image.”

Yesudas was clad in his trademark white shirt and trousers and white shoes. When he entered the house, Mathews told the singer, “Just for her, I brought you here.”

This, of course, turned out to be prophetic statement, although nobody could foresee it then. After the meeting, Prabha's father told her, “Despite being such a famous singer, Yesudas is so humble and down-to-earth.”

Soon, Yesudas and Prabha began speaking on the phone whenever the former had a programme in Thiruvananthapuram. They also met a couple of times. “Later, through a mutual friend, I heard that he liked my long hair,” says Prabha. Over a period of time, they fell in love.

However, marriage was not going to be easy since they belonged to different Christian denominations. But, eventually, love triumphed and they tied the knot on February 1, 1970.

So, after 42 years of marriage, what are the qualities that she admires the most in Yesudas? “He is very loving, but also very strict,” she says. “He is firm with everybody because Chachen has his principles. My father was very strict, so I did not feel anything unusual when my husband was also like that. He will always advise me on the way I should talk and behave. Chachen always emphasised that I should be polite with everybody. He is like a teacher to me.”

At this moment, Yesudas comes into the room, at the 16th floor suite of the Holiday Inn at Kochi, and a big, glorious smile breaks out on Prabha's face. Her eyes sparkle with love and affection.

Later, when he leaves, Prabha says, “Chachen is a straight-forward person. If he gets angry, he will show it. Many people have got hurt because of this. But he cools down equally fast. He has the temperament of a true artiste, which means swift mood changes.”

But all these qualities seem to fade as a look of awe comes on her face. “But what is the most amazing trait of my husband is his capacity for hard work,” says Prabha. “I have never seen an artiste who practices so much. From morning to night, his only thought is music. Now that our three sons -- Vinod, Vijay, and Vishal -- have grown up, and settled, [two in the US and one in Chennai], he has gone even deeper into the music. He keeps saying, 'I am a student of music'.”

Incidentally, Yesudas has sung 40,000 songs in Malayalam and other languages in a 50-year-long playback singing career.

Meanwhile, what is a surprise, in these times of feminist anger towards men, are Prabha's views on marriage. “In my view, and I am telling this to youngsters who are about to get married, the husband should be the boss of the house,” she says. “In a company, if there is no boss, how will it function properly? The same is the case with a family. Somebody has to listen to one person in authority. A woman should give respect and love to the husband and he will take care of you. Why do wives worry so much?”