The master of all he surveys 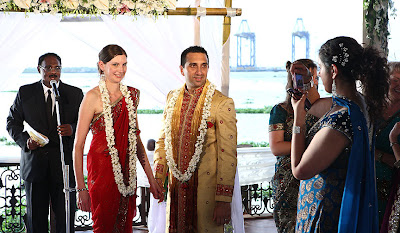 Anil D'Silva has been a master of ceremonies for the past several years. He talks about his experiences

Photo: Tessa and Sandy moments after their Jewish marriage. Anil D'Silva is standing behind them

The slim girl was wearing a crimson saree with an off-the-shoulder blouse, with red stiletto heels. Her hair was pulled back in a tight bun, while a marigold garland was hanging around her neck. The boy, with gelled black hair, wore a striking-brown sherwani and white pyjamas, with a red rose in his lapel, apart from a garland around his neck.

She is a Jew, he is a Punjabi. Both lawyers, Tessa and Sandy had met in Kochi and got married in London. But now they wanted to recreate their Jewish marriage at the place where they had met for the first time. And that was how Anil D'Silva came into the picture.

“I was the celebrant who conducted the marriage,” he says. “They gave me a script to read.”

A special canopy, called a chuppah, which represents God's presence, shelter and protection, was made at the Taj by Vivanta hotel. “I went through the seven stages of the marriage, and declared them husband and wife,” says Anil. There were only 38 guests present, all of whom had flown in from abroad.

This was one of his most interesting experiences in ten years of being a Master of Ceremonies (MC) in hundreds of wedding receptions, corporate events, training programmes, and presentations all over Kerala and in Mumbai, Chennai, and Bangalore.

So what are the qualities needed to be a good MC? “You have to get involved with the event,” he says. “It is not enough that you come dressed up at the time of the programme and jump on to the stage. You have to understand the purpose of the event, who is the client, the participants, as well as the members of the audience.”

Anil always talks to the people beforehand. “For a marriage, I will meet the boy and the girl and their relatives a couple of times before the function,” he says. “I will take down notes to ensure that I get the names and other facts right.”

Later, just before he steps on to the stage, he will talk to the sound and video technicians, the photographers, and the light operators. “The MC is the master of the event,” he says. “So I have to ensure everything is in place.”

The other important quality is a proper voice modulation. “There are two places from where your voice comes from: One is from the throat, while the other is from the heart,” he says. “If the sound is not from your heart, you can never be successful.”

Anil has definitely made an impact. Paxson Rozario, who runs an event management company, says, “He has a different style as compared to other MCs. He knows how to keep the audience entertained, and keeps them involved all the time. My clients keep asking for his services all the time.”

Innovation also helps to keep Anil popular. “In an Anglo-Indian wedding, after the first dance, depending on how relaxed the couple is, I will give them a bar of chocolate,” he says. “I will ask them to bite it from both ends, without using their hands, and inevitably their lips will meet. The audience, including parents, has enjoyed this aspect.”

Another new idea is to ask the groom to give a piece to the girl's parents and vice-versa. “I don't like the word 'in-law',” he says. “It is a son going into a new family and a daughter doing the same. So I started this practice to cement the relationship.”

But not everybody takes these innovations in the right spirit. Once at a wedding, he noticed a husband trying to coax his wife to get up for a dance, but she remained in her chair. So Anil stepped down from the stage, and in full glare of the spotlight, he requested the woman for a dance. She accepted, but later, she said, with a naughty smile, “You are not a Master of Ceremonies, but a Master of Calamities.”