A taste of Spanish tapas 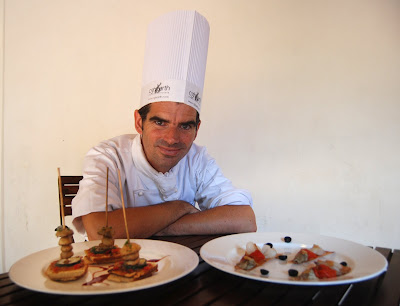 Chef Aitzol Alzibar made the famous finger food, dipped in olive oil, a hit with Malayalis

On a languid Friday afternoon, at the David Hall, Fort Kochi, a small group of people, foreigners as well as the locals, were sitting on wooden benches in an open-air restaurant. The lawn by the side had yellowing leaves nestling on green grass. Shafts of sunlight filtered through the branches of overhanging trees. It was an ideal setting to enjoy the Tapas festival by chef Aitzol Alzibar from the Basque region in Spain.

“Tapas is finger food,” says Aitzol, in accented English. “It is served in bars, and taken along with a glass of wine or beer. For each glass, you are supposed to take one tapas snack.”

Essentially, you spend 15 minutes in a bar, have wine and tapas and then go to another bar. You take another drink and a tapas. “This act of drinking and having tapas is called tapeo,” says Aitzol.

As expected, it was quite delicious. You could start with a gazpacho, a cold soup. An octopus placed on a slice of potato and dipped in olive oil simply rolled down the palate. Fried mussels with garlic mayonnaise was equally tasty. Then there was tuna fish on toast with garlic and red peppers. Other dishes include an omelette, called the Tortilla De Patata, the Pan Con Tomate Jamon (ham and tomato on bread), crab cakes, Escalibada (roasted onions, peppers, and aubergine), and vegetable croquettes.

A group of housewives sitting at one corner were having a ball. Says Kavita George: “The mussels are very good. The taste is as good as I have had in bars in Spain.” Added Mrinalini Bindra: “The presence of olive oil adds to the taste. It is less spicy. The flavours are different from our Kerala cuisine.”

Aitzol landed up in Kerala through a mutual friend, a Malayali named Sajith, who works in Spain. “So now I am teaching the chefs of the CGH Earth group on how to make tapas, while I learn how to make Kerala cuisine.” He says his favourite is red fish curry.

Meanwhile, executive chef Ajeeth Janardhanan, who works in Brunton Boatyard, one of the premier hotels of the CGH Earth Group, says that they have plans to start a Kerala-style tapas. “We could make a coin-size appam with a bit of Kerala duck roast on top,” he says. “Or we could put some prawns over idiappams [string hoppers].”

Ajeeth says that they learned one very important aspect from Aitzol. “He made the food from his heart, with love and affection,” says Ajeeth. “We must do that all the time.”

Asked the major difference between Indian and Spanish cuisine, Aitzol says, “In Spain, we retain the flavour of the fish or the meat. But in India, the spices and the masala powders overwhelm the original taste.”