Say No to Google and Microsoft 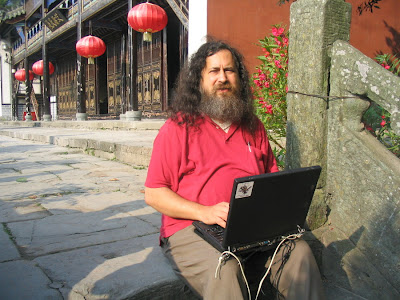 Richard Stallman, one of the world’s leading activists for free software, speaks about the loss of freedom and privacy when you use the products of top-tech firms

It is 5.30 p.m., but Richard Stallman is walking around in his air-conditioned room in a multi-storeyed building at Panampilly Nagar, Kochi, holding a mosquito bat and swatting the insects as soon as he sees any of them. “If you keep the door open, they will swarm in,” he says. It seems that one of the world’s premier activists of free software is not happy with the freedom of mosquitoes to fly around anywhere.

“Free software means programming that respects the user's freedom,” says Stallman, as he finally settles down on a chair and has a cup of tea all by himself. “This includes the liberty to study the source code and change it, to make the programme do what you wish, and have the right to distribute copies."

Stallman says that all this is not possible when you use the software of tech giants like Microsoft, Apple or Amazon. “Firstly, they are all non-free,” says Stallman. “Secondly, they have malicious features. Some spy on the user. Microsoft Windows has features which restricts what users can do with the data on their computers. In fact, Windows allows Microsoft to forcibly install changes in the software, without the user's permission.”

As for Apple, users are not allowed to use programmes of their choice. Free software is a complete no-no. “Customers can only install programmes taken from the Apple applications store,” says Stallman, who, with his long flowing beard and straggly hair, looks like a modern-day Moses. “They practice a rather arbitrary censorship. This was [founder] Steve Job's evil genius. He figured out a way to convince people to buy computers that would restrict people more than ever. ”

As for Amazon's e-book, 'Kindle', it is also a malevolent device. “It forces users to identify themselves in order to buy books,” says Stallman. “This is tyranny. The names of people and what books they read should not be in anybody's database. In Kindle, you are unable to give the book to anybody else because there is no software to do that.”

Amazingly, in 2009, Amazon remotely deleted thousands of George Orwell's '1984' and ‘Animal Farm’ from user's Kindles. “They had a dispute with a publisher,” says Stallman. “They realised they were not supposed to sell these books. So, they deleted them.”

To paraphrase blogger Sojo Varughese who wrote on the website, TechnedIN: ‘This indicates that Amazon has the power to remotely control your Kindle. We have to be afraid of that. What about Microsoft? Do they have the power to control your laptops and PCs? And service providers like Google or Yahoo? Do they also have the ability to meddle with your emails and online documents?’

Meanwhile, Stallman says, with a smile, “The Kindle software is designed to burn your books. That is why it is called a Kindle. It means to start a fire.”

However, Stallman is happy that many people are using free software in Kerala. “There are businesses that use free software-based solutions. But, obviously, most Indian computer users are still using Windows.”

Essentially, what Stallman is trying to say is that one should opt out of the digital universe. “If you don't you will lose out more than if you stay inside,” he says. “The question is: 'Do you care about your freedom or your immediate pleasure or convenience?' So far, companies like Amazon have succeeded in taking away freedom because people don't care. I am trying to make them care.”

Stallman has felt so strongly about this, that, in 1984, he started a project to give users a free Operating System known as the GNU. “I did this so that users can have freedom,” he says. “It is linked with a programme called Linux. So, it is called GNU + Linux. We have to try to put an end to the tyranny of firms like Microsoft and Apple.”