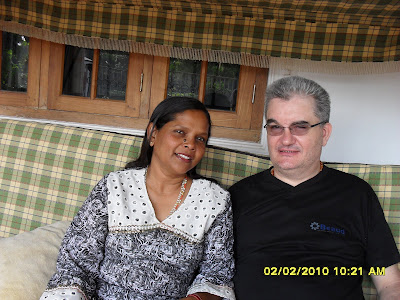 Kochiite Sherly has been married to Frenchman Daniel Frison for the past seventeen years. She talks about the joys of being married to a foreigner

In the 1990s, Frenchman Daniel Frison would come annually to Thiruvananthapuram because he loved Kerala and India. There he met a few friends from Kochi. One day he told them he wanted to marry an Indian girl. Back in Kochi, they informed their landlord, Lissie, who felt her unmarried sister Sherly would be a good choice. At that time, she was working in a firm in Chennai.

Daniel saw some photographs and liked Sherly. Then he went to Chennai and met her. They were immediately attracted to each other. Thereafter, armed with several photographs, Daniel went back to France and told his sister and father about his desire to marry an Indian woman. His mother had already passed away. They accepted his decision.

On February 13, 1995, Daniel and Sherly got married at the St. James church at Chambakara, Poonithara. “About 13 people came from France,” says Sherly.

Asked the reason why he married Sherly, Daniel says, “I found her trustworthy, loyal, tolerant and beautiful. In France, at that time, one in every three marriages was ending in divorce. Now it is one in two. I wanted to have only one marriage in my lifetime. So, I decided to tie the knot with an Indian woman.”

Two months after the marriage, Sherly went to France for the first time. Daniel's home town, Annecy, was just 45 kms from Geneva, Switzerland. “While I was amazed by their fair skin, the women said that they wanted my brown colour,” says Sherly. In fact, during the months of June to August, French women would spend hours sunbathing on the beach. They would also go to tanning salons to receive ultra-violet rays. “However, nowadays, because of that, a lot of people have got skin cancer,” says Sherly.

Sometimes, when Sherly would go to the town’s park, the people would come and talk with her. Within a year of her marriage, she had learnt to speak French fluently. “In those times, I was the only Asian there,” says Sherly. “My husband told me that even though his family had lived in the town for 40 years, so many people had never spoken to them, as they did with me.”

And this increased when they had a son, Anthony, who is now studying in Class 9 at Choice School . “Many residents had children who had grown up and left home,” says Sherly. “So they were lonely. They would invite us for tea or coffee, and play with Antony.”

Today, Sherly and Anthony stay at a riverside villa in Thykoodam, while Daniel, who is a mechanical engineer, works for a firm in Annecy. “He comes every four months,” says Sherly. “During the summer vacations we go there and spend two months.”

So, after 17 years of marriage, what does Sherly like about Daniel? “He is loving and caring,” she says. “Daniel is a wonderful cook. He knows how to make Italian, French, Thai, and Indian dishes. He can also cook Kerala-style curd rice, sambhar and meat curry. Every night he has kanji and pickle. When he returns to France, he takes along many packets of pickles.”

She remembers how, when she goes to France, her husband does the cooking most of the time. “In the morning, he will ask, 'What do you want to eat today?'” says Sherly. “Sometimes, my son and I will say, 'Pizza'. Then he will wear the apron, and go into the kitchen for two hours.”

Sherly and Anthony will watch TV. “Then just like a waiter in a hotel, he will place the pizza on a tray, come up to me and say, 'Madam, your meal is ready.' Can you imagine a Malayali husband behaving like this?”

She bemoans the male-dominated culture in Kerala. “Malayali men have big egos and never offer to help their wives at home,” she says. “With Daniel, he is keener to fulfill my wants rather than his.”

When asked about Daniel's negative traits, Sherly shakes her head and says, emphatically, “None.”