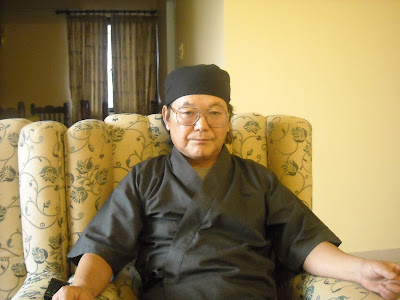 In the kitchen of Japanese chef Akinori Nishloka’s apartment, at Kochi, M.V. Charles is busy chopping vegetables with a steel knife. For the past three months, he has been undergoing training under the Japanese chef. And this is in preparation for the new restaurant, 'Tokyo Bay', which will be opening at the Hotel Presidency very soon. Asked what are the common features in all Japanese dishes, Charles says, “There is frequent use of salt, tamarind, and sugar.”

Akinori is busy preparing different type of menus. In one, he starts with chicken cutlets. This is followed by a small dish called the kobachi. He rushes to the refrigerator and takes out a glass bowl. In it, there are radish, pickle, chillies, coriander, capsicum, carrot and basil leaves, all placed in a liquid of vinegar and salt. “Kobachi is an appetiser,” he says.

Thereafter, there is the Miso soup, which is the most famous in Japan. “It is made of soyabean paste and can consist of dried sardines or tuna.”

Then there are Japanese pickles, Chinese cabbage, and chicken cutlet with shredded vegetables. “You can have rice or steamed bread,” he says. “Japanese rice is thick and sticky. People in Kashmir eat the same type of rice, so we are getting it from there.”

Other items include prawn rolls in omelette, tuna in toasted sea plants, squid or egg rice balls. “You could also have a chawanmushi,” he says. “This looks like a pudding, but it is not sweet. Inside are chicken, vegetables, and mushrooms.” And finally, there is sushi.

“It is raw fish,” says Charles. “But when you mix it with the sauce, it is tasty.” So will the Malayali take to the Japanese cuisine? “Things like chicken cutlets will do very well,” says Charles. And will Akinori put in a bit of masala powder to satisfy the Mallu palate? He laughs and says, “No powder. Instead, I will give masala sauce separately. The patrons can mix it with the food any way they like.”

What Akinori is very proud about is that the Japanese can make several dishes from one vegetable. “From potatoes, we make 30 varieties,” he says. “From Chinese cabbage, we can make soup, salad, pickle and sushi rolls.”

But what is the most taxing work for him is when he goes to Broadway to buy vegetables. “Ladies fingers and beans are very hard,” he says. “Unlike in Japan, the good and the bad vegetables are put in the same basket. In Japan, they throw away the bad items. I have to observe carefully and take the best.”

Akinori, who has worked in Germany, Iran, Iraq, and Saudi Arabia, has been in Kochi for the past three years. Earlier, he was making food for the employees of the Japanese company, IHI Corporation, which was involved in the setting up of the LNG gas terminal at Vallarpardom. When that work got over, he decided to stay on, because he loved the people. “They are nice and peaceful,” he says. “They have bigger hearts than the Japanese.”

So, watch executive chef Akinori in action at the Tokyo Bay in the near future.