Exploring their own spaces 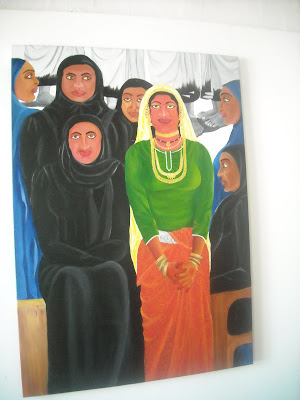 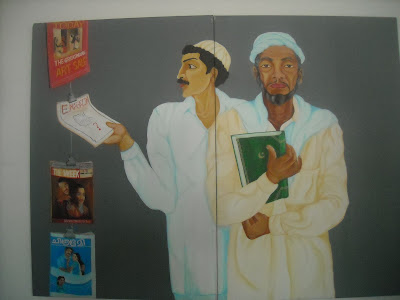 Three painters dwell inside and outside themselves to produce moving works

In T.R. Sunil Laal’s acrylic on canvas, a group of Muslim women are standing in black and blue burqas, but their faces are uncovered. They have sad-looking eyes and stiff postures. And standing next to them is a woman, in a bright green blouse and orange saree, wearing thick gold earrings and a necklace, offset by a bright yellow scarf, and with a smile on her face. The colours are deep and rich and very satisfying to see.

This painting gives a hint at the restrictions placed on Muslim women in Kerala, in terms of their dress and movement. And yet deep down they yearn for freedom… to wear what they want, to do what they want, to just be themselves.

“In Wayanad, where I grew up, there was a time when Muslim women wore colourful clothes and jewellery,” says Sunil. “But in recent times, there has been a rise of conservatism and the adoption of the dresses of Saudi Arabia. It is rare nowadays for them to go out alone. They are always accompanied by their male relatives.”

And unlike the women, these men have no sartorial restrictions. “They wear tight jeans and bright T-shirts,” he says. “I feel, deep down, Muslim women are yearning to express their individuality.”

This feeling is wonderfully expressed in another acrylic on canvas, titled ‘Passion'. It shows a Muslim woman, wearing a black chador, gazing longingly at a reddish-yellow paavada and blouse placed on a headless mannequin.

Another painting, called 'Generation Gap', shows a man, with a grey-black beard, wearing a white cap and white clothes, holding a Koran firmly against his chest. The star and the crescent can be seen clearly on the cover. He has a stern-looking face, while behind him is a young Muslim, with jet black hair and moustache, who is peering surreptitiously into a magazine, which is hanging on a string outside a magazine stall. “The younger generation is keen to gain new knowledge, but sometimes they are hampered by the diktats of their religion,” says Sunil.

Meanwhile, Purnima J Naga has specialised is doing paintings on an acrylic sheet. And nearly all of the 15 paintings are of a young woman, with straight-backed black hair, going through different moods.

In one, a girl is wearing a salwar kameez, and next to her is her shadow in black. It is drawn in thin, long strands. Another one has the girl sitting on a verandah railing and staring winsomely at the world. “These are all self-portraits,” says Purnima. “I live alone in Hyderabad and hence, I go through all sorts of moods. I am keen to capture the internal and external beauty of women.” The unusual thing about painting on acrylic sheets is that it is done at the back and the image seeps into the front.

Finally, there is Sudipta Das, who is worried about the relentless advance of digital images. So, her image of a goddess has a face pull of computer pixels, as well as her hands. Owls on both sides have pixels on the faces. “A computer transforms faces into an artificial emotionless state,” she says. “Pixels break down the structure of a face.”