Becoming the nucleus in Maradu 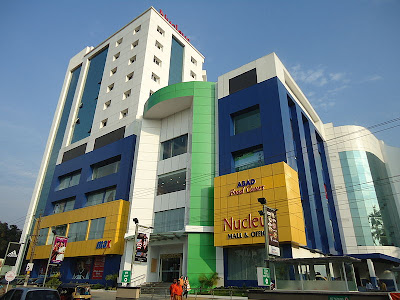 The Abad Nucleus mall, at Maradu, Kochi, celebrated its first anniversary recently. A look at the its attractions

On most weekends, the Thevara-based Sheela Abraham goes to the Abad Nucleus Mall in Maradu, Kochi. She is accompanied by her two children, Beena, 10, and Roshan, 8. “It takes me only ten minutes to reach the mall,” says Sheela, whose husband spends six months on a ship. “The Nucleus is much less crowded and frenetic, as compared to other malls in the city. There is ample space to walk around, and it is clean and fresh inside.”

Dr. Najeeb Zacharia, the MD of Abad Builders will be pleased to hear this. The mall completed one year on November 5. It has a leasable area of 1.25 lakh sq. ft., spread over four floors. Ninety per cent of the space has been rented out. Among the places that Sheela frequents are the Food Bazaar, the Food Court, DC Books, and the Max clothing shop.

Dinesh N.R., Operations Manager of Max, says that nearly half of the people who come to the mall end up visiting their shop. “We are happy about it,” he says. “But we expect a larger number, when more retailers come in.” At present, 48 shops have been rented out, out of a total of 60.

Looking back, it seemed a risky and unusual move to set up a mall at Maradu, quite far away from the city centre. “But there are advantages,” says Riaz Ahmed, the MD of Abad Hotels. “The most essential attribute for the success of a mall is its accessibility.”

There are three easy ways to reach Abad Nucleus: from National Highway 49, from Pettah, and through the new Tripunithara bypass. “The majority of our customers come from Thevara, Tripunithara, Mattancherry, Fort Kochi, Aroor, Kolencherry and Chotannikara,” says Riaz. “They find Nucleus an ideal location.”

The mall gets about 10,000 visitors on the weekends. And most of them come on cars and two-wheelers. “There is a parking facility for 320 cars and 150 two-wheelers,” says Najeeb. This is available in the front, at the side, in the basement and the terrace, for which there are two car lifts.

But what the Abad management is most proud of is that the Nucleus is a green mall, the first in India to get a Leadership in Energy and Environmental Design certificate from the USA.

“During the construction we used materials which are environment-friendly like low Volatile Organic Compound paints,” says Riaz. “It is a non-pollutant. All water is recycled and there is a 40 per cent decrease in the consumption of energy. We also maintain high indoor air quality. It translates into a better atmosphere inside the mall.”

To create an even better atmosphere, the management is planning to come up with innovations, like a new 6D cinema. When you view a 6D film, you will actually experience events like rains or storms, similar to what the onscreen characters are going through.

“It is far more advanced than 3D, and will be a stunning experience for the viewer,” says Najeeb. “We expect it to be a big crowd-puller.”

To control the crowds, the mall has set up a secure environment. There are over 100 cameras in all the common areas, the parking facilities and the elevators. Recently, one woman lost her purse. It slipped out of the cloth bag that she was carrying. Thanks to surveillance cameras, the security personnel were able to locate the precise location where the wallet had fallen, and was able to return it to the owner.

Meanwhile, linked with the anniversary, a two-month long carnival has begun, with variety entertainment and activities, apart from weekly prizes and a bumper prize of a car.

These are all moments of happiness, but for the management their proudest feeling is that, thanks to the mall, more than 500 people have got direct employment. And the presence of Nucleus is having a spill-over effect in the area. New buildings and shops are coming up.

“The Nucleus is becoming the nucleus of Maradu,” says Riaz.