Letting down her guard 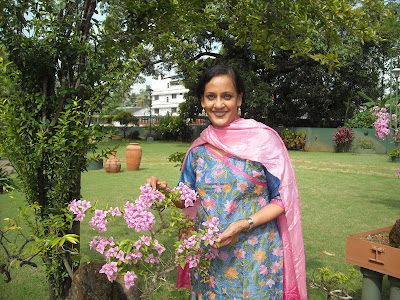 Sheela Kochuouseph talks about life with her husband, Kochuouseph Chittilappilly, the managing director of the Rs 700 crore V-Guard Industries Ltd

Last month, when Kochuouseph Chittilappilly, the managing director of the Rs 700 crore V-Guard Industries Ltd., returned from a business trip to China he gave a gift to his wife, Sheela. It was a Swarovski set of a pendant, earrings, and necklace.

“I was stunned,” says Sheela. “I asked him how long he took to select it. He replied that the moment he saw it, he liked it and decided to buy it. It was something special and it is these types of thoughtful gestures that can refresh a marriage.”

At 9 a.m., on a Monday morning, Sheela is looking refreshed herself. Earlier, she had returned from a session of playing badminton at the Rajiv Gandhi indoor stadium, had a quick bath and an even quicker breakfast. Inside the bungalow, beside the National Highway 47 at Kochi, it is silent except for the occasional squawk of a parrot.

Sheela met Kochuouseph for the first time in August, 1977. “He was smiling easily and dressed simply,” she says. “I liked him.” Since her father had died when Sheela was 15, her elder brother and mother made the decision of accepting the marriage proposal. The wedding took place on August 28. Within months she became pregnant and gave birth to son Arun, on their first wedding anniversary. Son Mithun arrived a couple of years later.

So what is it like to be married to a business magnate? “He was not a rich man when I married him,” she says. “We lived in an apartment, near Shenoy’s theatre, for which the monthly rent was Rs 450.” Kochuouseph had five employees then and was making 50 stabilisers a month.

“Yes, today, it is nice to live in a large house, travel all over the world, and to lead a comfortable life,” says Sheela. “But I was much happier when we lived in a small house, and moved around on a scooter. It was a simple life. He would spend a lot of time with me. Now we have a lot of public commitments. Both my husband and I have become very busy.”

Sheela is the managing director of V-Star Creations, a firm which deals in innerwear for men and women. “Even though I am a businesswoman, when I come home, I become a housewife once again,” she says. “I do the cooking, and wash the dishes. There are women who when they suddenly get a good income, forget their past, and behave in a high-handed manner with their husbands. That is wrong. And, anyway, I believe that men are superior to women. God has made it that way.”

So what are the qualities that she admires in this superior man? “My husband is systematic, hard-working, frank and considerate to his employees,” says Sheela. “He is a simple man and not crazy about money, plus he is not finicky about food.”

However, what Sheela found difficult to adjust to was the insistence on punctuality by Kochuouseph. “If he says we have to leave at 8 p.m., it has to be 8 p.m.,” she says. “Five minutes late is too much. It is like five hours to him. Even when we go on a holiday, he keeps to a schedule. I would like to laze about and get up late in the mornings. But he always insists that we keep the same discipline.”

Sheela admits it has been stressful to live with a successful man. “The more mentally strong a man is, the more difficult it is for the wife,” says Sheela. “In the earlier years, he would be hot-tempered with me. But I have managed by confiding in my friends, and having hobbies like painting, gardening, and interior decoration.”

As for Kochuouseph as a father, he has given a lot of freedom to his sons, as well as guidance. “My husband has given them a big business,” says Sheela. “For any child this is a blessing. They just have to look after what he has made. Although I feel that it is also good for children to start from scratch. Then you are able to appreciate more what you have.”

Like all marriages it has been a bitter-sweet experience, but what shines through is Sheela’s commitment. “I cannot live without my husband,” she says. “So, at any cost, I will be by his side. I want to always be with him. It is not because he is a rich and successful man. It is just that emotionally I am attached to him. Ultimately, I am his wife.”