A feast of biryani 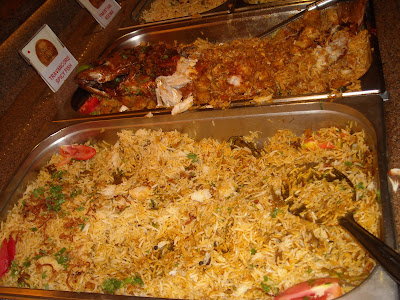 On a Sunday night, chef N. Shrikantan is having a busy time. There are several patrons who have come to take part in the 'Biryani Galore' Fest at the Spice Route restaurant at the Oberon Mall. “Since biryani eating is getting popular, we decided to have the festival,” he says. And the restaurant has pulled out all the stops.

On the buffet table, there are 12 varieties of biryani. And you can start with the Peshawar mutton biryani. “In the Pakistan style, they use a lot of oil,” says Shrikantan. “I have used much less corn oil and ghee.” Thanks to the ghee, the meat is succulent and tasty. There is also a hint of mint and coriander leaves, apart from spring onions.

After that, you could still remain in the neighbouring country by trying the Pakistani Kheema Biryani with its standout minced beef. Thereafter, there is a stylishly named Nawabi biryani. “It is usually made for Eid ul Fitr,” says Shrikantan. There is a hint of sweetness in it. “I have added apple pieces and mixed vegetables,” he says. The most popular in India is the Nawabi biryani made in Lucknow .

Other delights include the Hyderabadi Full-Chicken, the Andhra kitchen shrimp, and the dum beef biryani.

In case you want to return to Kerala, you can try the Travancore Spicy Fish, the Malabar Egg or the kappa biryani. Different types of rice have been used: long, short and thick grains. For example, for the Peshawar biryani, long grains have been used, because that is the style in Pakistan .

And the festival also caters to the vegetarian palate. There is the Idiappam, Tikka Paneer and the Kashmiri biryani, among others. “It is mostly North Indians who prefer to have vegetarian food,” says the chef. “On the other hand, Malayalis love to eat chicken or mutton biryani. So, this is a chance for them to try different styles.”

Patron Priya Menon liked the Nawabi biriyani the best because of its taste. “Overall, it was a nice culinary experience eating so many different types of biryani.”