No porters in sight... all the time 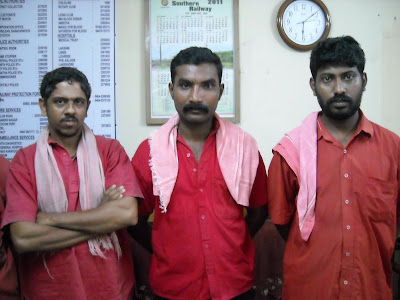 At Ernakulam Town railway station, passengers complain about the lack of porters. The elderly and pregnant women have a tough time

When educationist B.S. Warrier returns from Bangalore to Kochi every two months, he has the same experience each time at the Ernakulam Town [North] station. There is no porter to help him take the luggage from the station to the car park. “I am 75 years old,” he says. “It is very difficult for me to take it myself.”

Since the Island Express arrives at Platform No. 2, Warrier and his 65-year-old wife have to climb up the over-bridge and make their way, lugging their luggage along. “This happened at 10 a.m., and not late at night,” he says. “I have seen pregnant women and sick passengers carry their own baggage. The Railway officials are doing nothing about this.”

Station Manager K.V. Mathew clarifies that the porters are not on the payroll of the Railways. “We cannot insist on them being present,” he says. “If they are absent for ten days in a row, all I can ask for is a medical certificate.” The only emoluments given by the Railways are an annual complimentary pass for free travel and some medicines from the health unit.

Mathew is frank enough to say that if passengers complain about a shortage of porters, to a certain extent, they are right. “Out of 12 porters, who are supposed to be on a 24 hour shift, at least six of them may be on leave,” he says.

There is a reason for this. There is no demand for porters for all trains. It is only for specific long-distance trains like expresses that people have luggage to carry. “There are only 12 trains originating from North station,” says Mathew. “Whereas in the South [Ernakulam Junction], there are many more trains starting from there as well as passengers. So business is better for the porters there.”

Meanwhile, the porters at the Town station talk about the poor income. “We earn between Rs 160-180 per shift of 24 hours,” says Ashraf. “That is meagre. On Platform 2, there are two entrances. Auto-rickshaw drivers canvass for customers and offer to take the suitcases themselves. So, we lose the business.”

Regarding aged people and pregnant women not getting help, Prasad, another porter, says, “Most of the time, they are accompanied by people who carry the luggage. Otherwise, those who come to pick them up do so. Our biggest problem is that most luggage pieces have trolley wheels, and hence people do not need the help of porters. Of course, there are difficulties in carrying the baggage up the stairs, but that problem is absent when the train arrives on Platform No. 1.”

As a result of fewer customers and depleted earnings, a few porters go outside for casual work. This includes painting of houses, doing an electrician's job, and unloading material at a nearby godown.

“This is how we make ends meet,” says Ashraf. “In case, there are a lot of passengers who need their luggage to be taken, my colleagues will call us on the mobile, and we will come quickly to the station.”

The porters say that they make good money when people from North India come for a holiday in large groups. “Their baggage is put on a trolley and taken outside,” says Prasad. But apparently, this year, the takings have been poor because it has been a lean tourist season.

However, Warrier has stated that the porters are more interested in carrying commercial items, rather than the luggage of passengers. Mathew categorically denies it. “Those are different porters,” he says. “The ones who take the passengers' luggage are not allowed to pick up commercial items. You can distinguish them because they wear green uniforms, while the luggage-carrying porters have red shirts.”

What is clear is that unless the Railways take these porters on as employees, the problems for passengers will continue.