Getting back into the groove 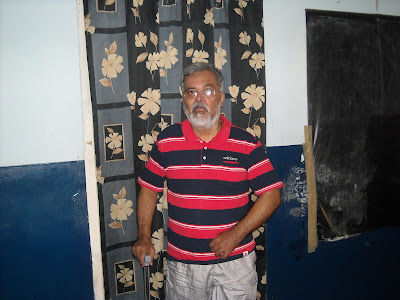 Musician Emile Isaacs, who was part of singer Usha Uthup's troupe for 38 years, suffered a stroke two years ago. He is making a slow but steady recovery

Musician Emile Isaacs blames himself for the stroke that he suffered in January, 2009. A few months earlier, he had gone on a month-long concert trip to the USA with Malayalam film stars like Jayaram, Parvathy, Padmapriya and mimic, Kottayam Nazir, apart from singer Usha Uthup. “On that trip I forgot to take the medicines to control my high blood pressure,” he says. “I am supposed to take my tablets every day. But for one month I did not do so.”

However, there were warning signs. One of his doctor friends told Emile that he did not look good. “But I replied that I felt fine,” he says. Following the trip to the USA, Emile went with Usha to Kolkata. “During a concert, I could feel my hand becoming numb,” he says. It was the beginning of a stroke.

It affected the movement of his left arm and leg. But by the grace of God, his memory and voice is intact, as well as his sight and hearing. One month later, Emile flew to Kerala and underwent physiotherapy treatment in the Medical Trust as well as the Lourdes Hospital in Kochi. The progress had been slow, but ever since a manual therapist, Sugha Prasad, began to massage him every day at his home, a few months ago, Emile has made a remarkable improvement. “Now the sessions have become very painful for me, which is good news,” he says. “It means the nerves are coming back to life in my arms and legs.”

Emile had been the bass guitarist for 'The Sound' band, which accompanies Usha in all her performances. “I had been with Usha for 38 years,” he says. They have performed all over the world, including offbeat places like Uzbekistan and Kazakhstan. Thus far, they had played in over a thousand concerts. “I was so busy with shows and shows and shows,” he says. “24 hours a day was not enough for me.”

So, it has come as a shock for Emile that he has been grounded after such a hectic career. “I believe that God wanted me to take a rest,” he says. “In all these activities I had no time for Him. The stroke has now brought me closer to God. I am praying a lot. One day I will bounce back.”

But when he bounces back, Emile no longer wants to play commercial music. Instead, he wants to do spiritual songs. “I want to play for Jesus,” he says. He has plans to go to the Divine Retreat Centre at Muringoor and team up with his brother Antony.

As for Usha, she is all praise for her colleague. “Emile has been a fine musician for very long,” she says. “But for me his greatest quality has been the way he has looked after his family all these years.”

Emile, the son of a prominent violinist, Joe Isaacs, started playing the guitar at 15. Because of his natural talent, he was hired as a member of playback singer K.J. Yesudas' band. They performed all over Kerala and in the Middle East. “Yesudas made me,” Emile says simply. “I was with the band for eight years.”

Later, Emile started a band called the Elite Aces, which consisted of his brothers, Eugene, Rex, and cousin Pinson Correia. They began playing at Volga, Sealord, and the Casino hotels at Kochi. Soon, they became popular.

When Usha came down from Mumbai, at the invitation of the Kottayam Arts Society, the Elite Aces performed for her. “This was our first concert with Usha,” says Emile. They clicked together and played for a number of years. Usha also helped the band to get a contract at the Oberoi Sheraton in Mumbai during the Christmas season. “We were the first Malayali band to perform there,” he says. Later, they played with Usha at Kolkata's top club, Trincas.

However, in 1979, the Elite Aces broke up and the band members went their different ways, while Emile stayed on with Usha, at Kolkata, and continued to play with 'The Sound'. Today, this band comprises of Bengali musicians and is still performing for Usha, even though Emile is no longer there.

“The show has to go on,” says Emile. “The music should never stop.”