Having wine and enjoying art 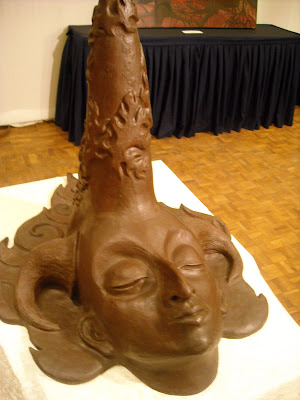 In the 'Art and Wine' exhibition, the works of veterans shared spared space with young talents

At the 'Art and Wine' exhibition, held at the Ramada Resort, Kochi, a fibreglass sculpture by Radha Gomathi catches the eye. It is the face of Hymavathi [another name for Shiva's consort, Parvati], and is painted in a deep chocolate brown. Hymavathi looks serene, with deep-set closed eyes, soft cheeks, a sharp nose and pouting lips. Just above the ears, there are two horns sticking out. And right in the middle of the forehead, there is a mountain peak rising up towards the sky.

The inspiration behind the sculpture is interesting. Radha had gone to Gaumukh, the mountain glacier from where the River Ganga begins. But just before the peak, she stopped beside a river and saw a pair of weathered horns floating on the surface. “It belonged to mountain goats who seemed to have perished in the icy torrents,” says Radha. “The image of the horns merged with Hymavathi's quest for Lord Shiva.”

Radha made the mountain to indicate that the desire to reach the peak and find God is within all of us. “We are all seeking an union with the Great Self,” she says. Onlookers who know Radha say the features of Hymavati resemble the Kochi-based artist herself. Radha laughs and says, “That was an unconscious effect.”

Radha's acrylic on canvas, 'Presence', is about a spiritual search. Drawn from the side, a nude woman stands, with long brown hair flowing down her back. She has a half-open mouth, and upraised hands, but interestingly, has closed eyes, and is searching for something. To accentuate the nudity, a part of the left breast, as well as a brown nipple can be seen. “She is searching for God, or the universal energy,” says Radha. “In other words, she is a spiritual aspirant.”

Veteran artist V.B. Venu's painting, 'Contemplative Bridges', is an examination of life. A bare-chested man is sitting on the ground. A cream-coloured face has been half-imposed on a darker one.

“Everybody has two faces: an inner and outer,” says Venu. A ladder is placed against the body and the top end rests on the left shoulder. There are figures of men going up the steps. Some are falling off, with flailing arms and legs. “The ladder signifies the path of success,” he says. “Everybody is trying to go up. Not all succeed. Some fail.”

C. N. Karunakaran's work is of a tribal settlement, with a husband and wife standing next to each other and discussing family matters, while children are sitting on the forest floor, including a teenage girl, wearing an orange necklace and with exposed breasts.

“There were times when painting camps would be held near tribal areas in Wayanad,” says Karunakaran, a former chairman of the Kerala Lalitakala Academy. “I saw their lives from a distance and wanted to portray them. I also wanted to express my sympathy for the marginalised people.”

As for senior artist T. Kaladharan, his glass painting is called 'Orma' (Memory). Green faces float about in a sea of red: he is remembering old friends during the sunset of life.

The other participants included Biju Kumar V.K. as well as bright young talents like Linu John and Nimmy Melvin.

Earlier, the show was inaugurated by K. Ramachandran Nair, the MD of Chitram Art Gallery, who said, “Art and wine can go together provided there is self control. We have seen many artistes and painters who have succumbed to wine. So self-discipline is very important.” However, thanks to free-flowing wines from Sula, self-discipline became an alien concept on a pleasant evening.