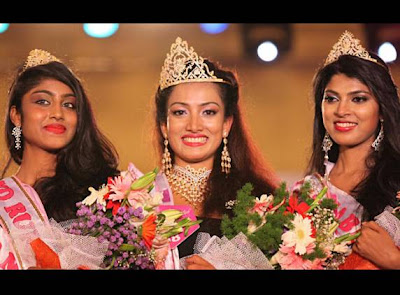 In the Hairomax Miss South India 2011 event, a Bangalore girl lifts the crown, while the pageant made history when a differently-able girl took part for the first time

In the end, Laxmi Anand of Bangalore pipped Kochi lass Elizabath Thadikaran, the reigning Miss Kerala, to win the Hairomax Miss South India 2011 title at a function in Kochi. After she was crowned, Laxmi said, “I had come here to win and achieved it.” Yamini Chander was the second runner-up. In total, there were 16 participants, with three girls from Kerala while the rest were from Chennai, Hyderabad, and Bangalore. The pageant also made history: actress Abhinaya was the first participant who has hearing and speech impediments.

Not surprisingly, she got the loudest applause from the audience. And it would be the presence of Abhinaya which would provide the first hiccup in the show.

After being eliminated before the semi final round, judge Srikant, a Tamil film star, suddenly announced that Abhinaya should be brought back and be the seventh participant. Compere Ranjini Haridas, flustered by this sudden addition, said, “There is more mirchi here than a reality show.” Ajit Ravi, the chairman of Pegasus, the organizers, said, “It was unexpected, but we accepted the judges’ decision.”

Not everybody in the audience appreciated the gesture, since it was a competition, and Abhinaya had been eliminated fair and square. In promotional material for the contest, Abhinaya had said, “Please don’t show sympathy for anyone’s disability, as they are trying to be as normal as others.” So, maybe, she could have practiced what she preached, and refused the nomination.

Meanwhile, Srikant enjoyed some fan support himself. Singer Ranjini Jose announced from the stage that she had a huge crush on Srikant ‘Sir’. So, was it in his honour that she only sang Tamil and Telugu songs for the Malayali audience?

The programme had contestants modeling designer sarees: red, green, blue, shimmering and not so shimmering, with silver, gold, and black stiletto heels, and with their hair tied up or flowing down their shoulders. It was followed by a self-introduction. As expected, there was clever word play. Here’s one from Elizabeth: ‘The purpose of life is to have a purpose’. What was surprising was how tall most of the girls were. Said Ranjini, “This must be the tallest batch I have come across. I feel like a dwarf next to them”

There was a linen design-wear round, in black and white gowns and skirts. But, after the ‘common question round’, it ended up in a tie between Laxmi and Yamini. So, all the seven contestants had to do the round again, before Laxmi was declared the winner, while Elizabeth squeezed past Yamini to get the first runner-up slot.

The show, which was supposed to start at 6.30 p.m., began at 7 p.m., and was still going strong at 11.30 p.m. Meanwhile, throats were parched, apart from growling stomachs. A frank Ranjini Haridas said, “I am pooped. This show is going on and on.”

The cultural programme in between the rounds was interminable, with a never-ending succession of songs and dances. Maybe Pegasus could break the monotony by bringing in a mimicry artist or have a comedy skit about fashion pageants. The clapping was lukewarm throughout, but intensified when Ravi of Pegasus gave a cheque to Parveena Hafeez, the MD of Sunrise Hospital, to sponsor a free heart surgery for a child.

For the girls, it must have been a wonderful experience, and for those who did well, a great boost for their self-confidence.