Living with a comic genius 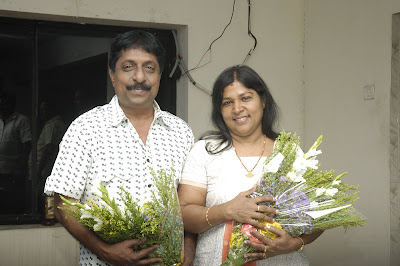 Vimala Sreenivasan says that her husband, film star Sreenivasan, is a child at heart, but a tough person on the sets

Photo: Sreenivasan and his wife Vimala on their 25th wedding anniversary

Vimala Mandodi would walk down a road to catch a bus to go to the Nirmalagiri College in Kuthuparambu, in Kannur district. Often, she would see a short, dark man who would be heading in the same direction. Every now and then the man would ask, ‘Is the bus on time?’ or ‘How are your studies?” Vimala would reply in monosyllables. It was only after a year that they began talking to each other. At that time, in 1974, film star Sreenivasan was a teacher in a tutorial college. “We liked each other from the beginning,” she says.

Very soon, Vimala realized that cinema was Sreenivasan’s passion. One day, he told her that he was going to the Film Institute in Chennai to do a course. Thereafter, he would send an occasional letter to Vimala stating his financial difficulties.

“Since his father did not accept his choice of career, he would not send much money,” says Vimala. “Sreenivasan's father wanted him to do his B.Ed and become a teacher. However, one of his uncles sent him a little bit of money and he managed to complete the course.”

In the meanwhile, Vimala qualified to become a teacher. When marriage proposals came, Vimala had to finally tell her own father that she had fallen in love with Sreenivasan. He was aghast. “My father felt that my husband would go after actresses and ruin my life,” she says.

But Vimala was adamant. Nevertheless, it took ten years before the couple could tie the knot, on January 13, 1984. All along, Sreenivasan was struggling to make a mark in the film industry. Meanwhile, within months of the marriage, Vimala became pregnant with son Vineeth. And it was just after he was born, that Sreenivasan starred in the first film he wrote, Oodarathuammava Aalariyam.

So what are the plus points of Sreenivasan as a husband? “Sreeni Chettan has always given me complete freedom,” says Vimala. “He has never said no to my personal wishes. If I want a new saree he will always say yes. If I wanted to go somewhere, it is a yes. On the other hand, I can see so many restrictions placed by the husbands of my friends.”

Vimala says that she always likes to wear salwar kameez, although people have told her she looks better in a saree. “Once I said, ‘Chettan, everybody tells me that I look nice in a saree. What is your opinion?’”

Sreenivasan said, “There is no doubt you look good in a saree.” But he has never insisted that his wife should wear one.

Vimala considers her husband’s spendthrift ways as a plus point. “Sreeni Chettan spends a lot when he has money,” she says. “I believe that if you have money, you should spend it. On this matter, we are both alike. If there is little money, he will say this is all what I have, and we have to control our spending.”

Vimala also admires her husband’s humility. “His character has not changed at all from the time I knew him during my college days,” she says. “In fact, the more successful he has become, the more humble he is in his personal life. Please don’t think I am praising him just because he is my husband. He is an innocent man inside. But if there is any mistake in his professional career, Sreeni Chettan can get very tough and angry.”

Because her husband is a creative artist, Vimala stays away from that aspect of his life. So when he is writing a script, Sreenivasan will live for three weeks at a stretch in a hotel. “Most of the time the mobile phone is switched off,” she says. “Only when Sreeni Chettan has finished his day’s work, will he call me.”

In fact, Vimala is so careful not to disturb Sreenivasan that when her two sons, Vineeth and Dhyan were children and they would fall sick, she took them to the doctor herself. “I would only inform Sreeni Chettan when the illness was over,” she says. “It is very important for an artist to have a happy atmosphere at home and that is what I have strived to do all the time.”