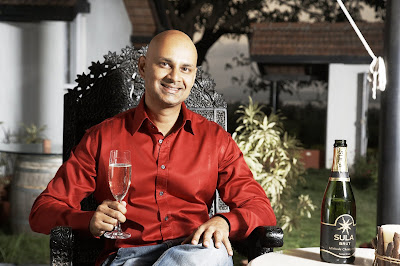 Rajeev Samant, the CEO of the Nasik-based Sula Vineyards is trying to get used to the unusual ways of the Kerala State Beverages Corporation (KSBC). The company gets paid only after shops and hotels, which buy the consignment from the KSBC, have sold the last bottle.

“All out-of-state beverages have to be sold through the KSBC,” he says. “Kerala is not the most remunerative of markets, but our sale has been doubling every year now. So clearly, wine drinking is catching on in Kerala.”

Top five-star hotels like The Taj and the Casino Group stock the wines. Not surprisingly, 70 per cent of the sales in Kerala are Sula wines and that is the position all over India . “This year we have had nation-wide sales of 5 lakh cases,” he says. “We expect a 20 per cent growth for the next decade.”

At the Holiday Inn in Kochi, Rajeev comes across as intense, focused, and passionate about wines. And his life has panned out in a way that he could not have imagined.

Rajeev grew up in Mumbai, where he studied in Cathedral & John Cannon, one of the best schools in the country. Later, he went to Stanford University where he got a master’s degree in engineering management and joined Oracle Corporation in Silicon Valley. Soon, he got himself a nice car and house.

“It was a great life, and there were no complaints,” he says. “But after a few years, I felt an inner dissatisfaction. I wanted to go back and do something in India.”

In 1992, a few months after his return, his father, a shipping entrepreneur took him to Nasik and showed him a 25 acre plot that he was trying to sell. Only wild grass grew on it. “I told my dad not to sell it,” he says. “The place looks so beautiful. I wanted to try something new.’”

Rajeev began with mangoes. But when he told his friends in wine-growing California that he was doing farming, they assumed it was grapes. “I thought, ‘ Nasik is full of grapes’”, says Rajeev. “If grapes are being grown for eating, surely it can be used to make wine. I am the right guy in the right place.’”

Nasik, at 600 metres above sea level, is, indeed, the right place. It has a cool and dry climate. All through the year, except for April and May, the evenings are cool. “Warm days and cool nights are what grapes love,” he says. “They like a big difference between day and night. That is what gives them the complexity. The night cool allows the flavours to come out, while the day heat allows the ripening to happen. And the two things together are an unbeatable combination.”

He produced the first wines in 1999, but there were no takers. “There was no wine culture in India then,” he says. “People asked me why they should buy my fairly expensive Indian wine, at Rs 450 a bottle, when they were getting cheap bootlegged French wine, at Rs 300. I had to go door to door and say, 'Taste my wine versus the French wine, and see which is better'.”

He got his breakthrough when Rahul Akerkar, the owner of Indigo, one of Mumbai's finest restaurants, said, “I like your wine and will support you.” And he put it on the list.

Says Rahul, “It was important for me to help homegrown entrepreneurs." Regarding the plus points of Sula wines, Rahul says, "Sula wines are well-made and quality driven wines and can hold their own against similar wines produced anywhere in the world.”

Then Mr. Lam, who was in charge of the Food and Beverages for the entire Taj hotel group, also put it on the list. The Oberoi hotel chain followed soon. “Thereafter, there was no looking back,” says Rajeev.

Today, Sula makes red, white, rose and sparkling wines, under different brand names (see www.sulawines.com). But Indians prefer the fresher, fruitier red wines with a slightly stronger taste, because they are used to spices in the diet and the heat.

Meanwhile, Rajeev is traveling all around the country to create a wine culture. “We will do 1500 tastings this year,” he says. “That is the only way to create a widespread awareness of wine.”