All for one, and one for all 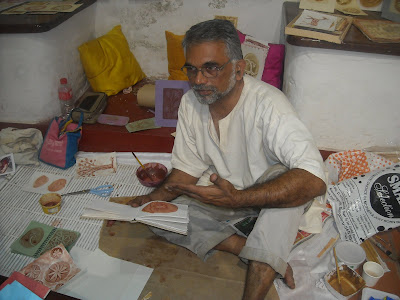 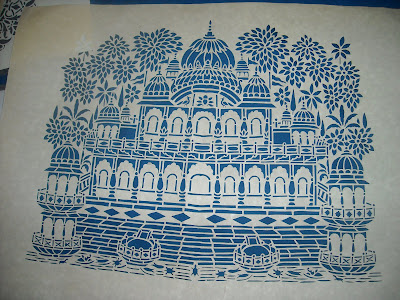 Photos: Artist Radhakrishna Bandagadde; a paper cutting of the temple at Vrindavan, Mathura

At the Hundred Hands exhibition held at the David Hall in Kochi, Ram Soni stands behind a table and picks up a piece of paper. Deftly, he cuts small fragments of paper with a small pair of scissors. “I am giving the finishing touches,” he says. After a while, he holds up the paper. It is a paper cutting of a temple, with its high conical roof, thick pillars and narrow, conical arches.

“This is the temple at Vrindavan, Mathura,” he says. All around him are paper cuttings of tigers, plants, trees, birds, and of Lord Krishna. Ram is from Alwar in Rajasthan. “It took me 25 years to learn this skill,” he says. “My family may be the only one who is practising this Sanjhi paper art in India. I usually use handmade or recycled paper.”

Sitting on the floor at some distance away is artist Radhakrishna Bandagadde from the Shimoga district of Karnataka. He is a practitioner of the Hase Chitra mud paintings which are created to celebrate festivals and weddings.

“We place the mud in a pot of water in the night,” says Radhakrishna. “The next morning, the sand and stones have settled down at the bottom. We take out the 'cream', add glue or Fevicol, and then do the drawings on paper, using a blade or the fingertips.” The results are striking to see: ochre-coloured goats, and leaves and flowers.

At other areas of the hall, there are recycled paper products like notepads pens and bags on sale, apart from balms made of beeswax, cocoa and mango butter, carpets from Mizapur, clothes and cushion covers made by Adivasi and Dalit women in central India, crochet earrings, necklaces, and fashion accessories, apart from miniature Mughal and Gondh paintings.

All the participants are the members of the 'A Hundred Hands' initiative, a non-profit trust set up by the Bangalore-based Dhawan sisters, Mala and Sonia.

“We are trustees of a women's farmer group called Vanastree, which is based in the hill station of Sirsi in Karnataka,” says Mala. “They were struggling to sell their organic produce. So, five years ago, I asked them to display their wares in the garden of our house, off MG Road in Bangalore.”

The response was very encouraging. “Many people came and bought things,” says Mala. “Soon, individual artistes and groups came and met us. I realised that there was a need to provide a platform for small artistes to showcase their work. That was the catalyst.”

A Hundred Hands was set up as a non-profit trust in September, 2010. “We called it A Hundred Hands because it is a collective and also to signify that the products are all hand-made,” says Mala.

There is an interesting mix of craftspeople. “There are people living in a village who have no access to urban markets,” says Sonia. “On the other hand, there are contemporary urban artistes who need a platform. The criterion for membership is that the products have to be hand-made, with a contemporary edge.”

Even if it is a traditional art, there must be an evolution in the art, which is relevant in today's context. So, Mala told Hase Chitra artiste Radhakrishna to stop thinking of only doing wall paintings.

“There is a limit to how many people will give commissions to paint their walls,” she says. “I had an old trunk and asked him to paint it, so that we can use it as a coffee table. He has painted a few trunks and this can be placed in modern living rooms. But the essence of the art remains the same.”

Till date, there are 40 members in the collective. And they have held a few exhibitions in Bangalore. The latest, a couple of months ago, generated sales of Rs 26 lakh. “All the money goes to the artistes,” says Mala. “There are no middlemen or commissions in our collective.”

Thanks to the interest shown by the David Hall curator Padmini Krishnan, the exhibition was brought to Kochi for the first time. Says Padmini: “The response has been encouraging.”
Incidentally, the accommodation and travel of the artistes were sponsored by the owner of the David Hall, the CGH Earth Group.

Says Managing Director Jose Dominic, “The corporates are supposed to only make profits but we do have a social responsibility. When you fulfill that, it adds another dimension to the company. You are looked up by your customers, employees, and the wider community. All of them see you in a different light. And this increases our brand value.”