'Every day is new and exciting' 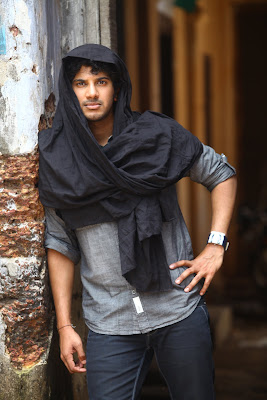 Dulquer Salmaan stands on the top of an escalator on the second floor of the Abad Nucleus Mall at Kochi. He is wearing a blue leather jacket, torn jeans, and has brownish, spiky hair. A pair of black headphones is placed around his neck. Soon, he steps on the elevator, holding a large green suitcase and waves to someone in the distance.

Dulquer’s debut film, ‘Second Show’ released on Friday, February 3, but he is already hard at work on his second film, ‘Ustad Hotel’ directed by Anwar Rasheed. The previous day, the shoot was supposed to end at 10 p.m., but it went on till 4 a.m. It is no surprise that Dulquer looks a bit groggy.

“I am fine,” says Dulquer, the son of superstar Mammootty, after the shot is okayed within two takes. “I am enjoying the process of film-making. Every day is new and exciting.” But he has his feet planted firmly on the ground and is keenly aware of the vagaries of a film career. “You can be a really good actor and, yet, things might not click at the box office,” says Dulquer. “Some films just fare badly. There are many hard-working actors who have done several films, but never made enough of money. This career could go anywhere... plus or minus.”

And here is more realism. “I know that I am getting featured in the media only because I am just part of a lucky gene pool,” he says. “Honestly, I feel it is too early. I would have been happy to do media interviews after I had done about ten films. But I know that nowadays marketing is very important for the success of a film.”

His straight-forwardness is refreshing. And it is clear that he has an unstinted admiration for Mammootty. “My father began his career as a lawyer,” says Dulquer. “He grew up in Chemb, near Vaikom, and came from a very humble background. It was hand to mouth, in terms of food. My father told me he had nobody to guide him. Everything he learnt, it was along the way. He asked me to figure out acting on my own. He has placed more emphasis on integrity and showing respect to elders.”

And he smiles as he analyses Mammootty as a parent. “My father always had this battle within himself about being a father or a friend,” says Dulquer. “There were times when he wanted to be strict, but he also wanted to be my buddy.”

On the other hand, his mother, Sulfath, had a different type of influence. “My mother was very strict about the amount of money that was spent,” he says. “During my growing-up years in Chennai -- it was not that we lived a fancy lifestyle. She was always worried about my father's career. It was not predictable. Even the biggest of stars have fallen.”

Yes, but Dulquer seems to be a rising star who will make a mark in Mollywood.