‘We rarely discuss films at home’ 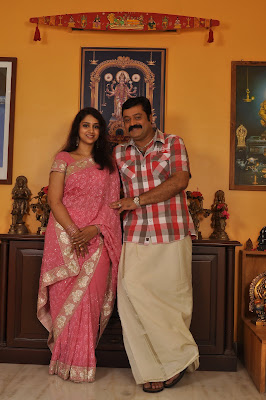 Radhika speaks about life with actor Suresh Gopi, who likes to spend time with his four children whenever he gets the time

In December, 1989, actor Suresh Gopi went to see Radhika at a relative’s home in Tripunithara. He was accompanied by the actor M.S. Thrippunithara who was playing Suresh’s uncle in the film, ‘Orukkam’. MS asked Radhika to sing something, and the trained classical singer sang a keerthanam. Later, a smiling Suresh said, “I love children. They are my weakness.”

So, it was no surprise that within a year after her arranged marriage to Suresh -- on February 8, 1990 -- Radhika gave birth to a girl called Lakshmi. But, soon, tragedy struck the couple.

On June 6, 1992, they had gone to attend a marriage function at Kollam with their daughter. Following that, while Suresh went to Kochi for some work, Radhika and Lakshmi returned to Thiruvananthapuram with Suresh’s brother Sanil Gopinathan. They were traveling in a Maruti and at a place called Thonnakal, there was a head-on collision with an Ambassador car.

“My thigh bone broke and I had other injuries,” says Radhika. Unfortunately, Lakshmi had a head injury and died the following day. She was one-and-a-half years old. “I had a memory loss for one week so I cannot recall anything,” says Radhika. “And nobody has told me what had exactly happened.”

But like all bereaved parents, they miss Lakshmi as intensely as when the incident happened.

“We have never forgotten her,” says Radhika. “Lakshmi will always be there permanently in our hearts, even though we have four children now.” They include Gokul, 18, Bhagya, 15, Bhaavni, 13, and Madhav, 11.

And whenever Suresh gets some free time, he likes to spend time with his family. “He makes sure he is at home in Thiruvananthapuram during Onam and other festivals,” says Radhika. “We never go out on these occasions. Instead, we invite relatives and friends to come over.”

Interestingly, despite Suresh acting in more than 250 films, over a 25-year career, there is not much discussion about movies in the house. “Suresh might occasionally talk about a film, but it is not like an obsession. We are an ordinary family,” says Radhika.

So what sort of a man is Suresh? “He is a straightforward person,” says Radhika. “Whatever comes to his mind, he will speak it out, whether it is good or bad. It can be painful at times, but I look on it as a good quality because he does not keep any resentment in his heart.”

But there can be repercussions, too. “He behaves like this in the professional field,” says Radhika. “So there are people who get upset by what he says. As a result, Suresh has made a few enemies.” His other qualities include that of being a teetotaler. “At the most he will have a glass of wine,” she says.

Regarding his negative traits, Radhika says that Suresh has a short temper. “He can get upset over the smallest of things and again say whatever is on his mind,” she says. “I am used to it now, and my nature is to forget.”

And what does she do when Suresh gets stressed out? “I usually leave him alone,” says Radhika. “Or I may talk to Suresh regarding the children. As you can imagine, with four of them, there is a lot of commotion in the house.”

Another stress-buster is to attend the 4.30 a.m. Nirmalyam prayers at the Padmanabhaswamy Temple. “It is a peaceful time at dawn,” she says. “There is a sense of togetherness and we feel spiritually refreshed when we return.”

So, after 22 years of marriage, what are the tips she would like to impart to youngsters getting hitched now? “Marriage is 99 per cent adjustment,” says Radhika. “We should consider the opinions of the spouse and make a mutually suitable decision. A woman should have freedom, but that does not mean that she imposes her views all the time. Finally, always remember that there are two families behind every marriage. You have to learn to get along with the other family members.”